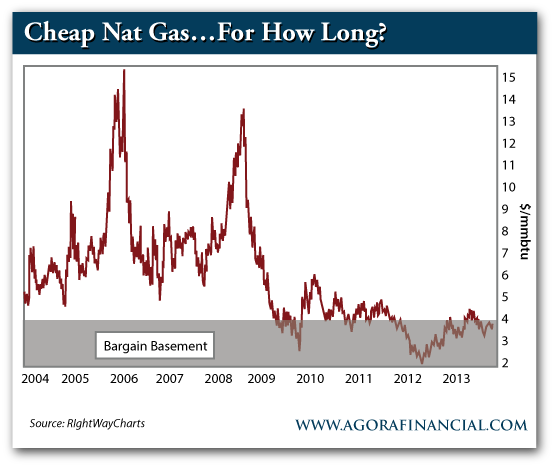 Ah, as the world turns…

…Russia upstages the president in a recent op-ed regarding Syria.

…The Middle East remains a pressure cooker, on high heat.

…The political “kids” at the U.S. capitol continue squabbling.

…More recently, China ratchets up its “de-Americanize the world” rhetoric .

Say what you will, the daily news beat has been giving us a lot to read lately. Besides your added reading, though, there’s an opportunity brewing that’ll right America’s ship, no matter what happens in the news bytes above. Let’s have a look…

Russia hates us. The Middle East is slowly forgetting about us (as we’re no longer their #1 oil consumer.) China is trying to be us. Heck, it even seems like Congress is against us!

Add it all up and you’d think the U.S. is in quite a pickle. But you’d be wrong.

Fact is, to become and stay a world power you’ve got to have a lot of things going for your country. A thriving economy, a “stable” currency, a hard-working population and abundant natural resources (like water and food.) But the real kicker is having a vast supply of affordable energy.

No matter what the negative, news blurbs portend, the U.S. has a lot going for it. Of note, our vast supply of affordable energy just keeps getting bigger. Indeed if you’re looking for the savoir of our country’s future, you’ll find it about 7,000ft below the topsoil.

You see, America was dealt a one-two punch of fortune.

The first punch was a swath of oil that’s propelling our country to the top of the world’s oil production ladder. Indeed, America’s shale oil story is playing out in front of our eyes and it’s a savior for the country’s economy.

The second punch hasn’t even wind-milled up yet.

As I type, the U.S. is producing more natural gas than ever before. Fact is, production has ramped up so high so fast prices had nowhere to go but lower. It’s an American energy Catch-22. We’re producing so much of the stuff, and the boom was so unexpected that prices have curtailed much of the current drilling. In other words, with such low prices drillers aren’t drilling for regular natural gas.

But just as Muhammad Ali lined up a few jabs before an uppercut, a huge haymaker of natural gas will be a game-changer for America.

All it takes is a little support for natural gas prices to get the next round going.

Natural gas prices have been in the doldrums for years now. But at some point — as soon as 2014 — the price will start heading higher.

More demand is coming from within the U.S. border. Power plants are switching over to cleaner burning natural gas, chemical plants are popping up to take advantage of low feedstock prices (same goes with fertilizer producers and other U.S. manufacturers) and slowly but surely more natural gas powered vehicles are hitting American roadways.

Not to mention more demand is set to come from outside of the U.S. border. Exports to eastern Canada, exports to Mexico and potential liquefied natural gas (LNG) shipments via tanker could all spur demand for nat gas.

Regardless of the reason, natural gas prices will surely rise. Even a modest rise to $5 or $6 would be a game-changer for the nat gas industry here in the U.S.

You see, the breakeven price for many dry shale gas plays is over $5. We won’t see much more activity in these gas fields until we see $5+ gas.

But when that happens, watch out! The same rig-race we saw run to oil plays throughout North Dakota, Texas, Oklahoma and others will be set to take place in America’s shale gas fields.

There won’t be enough rigs!

“They can’t make enough rigs if nat gas prices rise” one of my Texas oil and gas contacts tells me, hinting at the next big trend in America’s energy comeback.

You see, as it stands many of the now-prolific shale oil plays (the Bakken, the Eagle Ford and the Permian) have enough target zones to drill for the next decade. That means the oil rigs that are out there — all 1,367 that are spinning in the U.S. oil patch this week — won’t be drilling for natural gas.

Go back a mere five years and the rig count was flip-flopped. With few oil prospects available back then, natural gas rigs totaled 1,537…77% of total rig count.

In the past five years alone we’ve seen a sea-change in the rig world. With rising potential for higher natural gas prices, we’re set to see our next big opportunity in the sector. Only instead of seeing another flip-flop, we’re going to be looking at an all-out rig shortage.

That’s music to the ears of rig operators.

In the coming 12-18 months keep your eyes peeled for a rebound in nat gas prices. When that happens, make sure you’ve already locked in shares of your favorite rig operators.

World oil production is about to be shaken to its core…

Click here to see who is set to become the new king of oil — and how you can use the news to go for big profits as early as this month!