The Good, the Bad, and the Ugly Truth about Greater Vancouver’s Detached Market 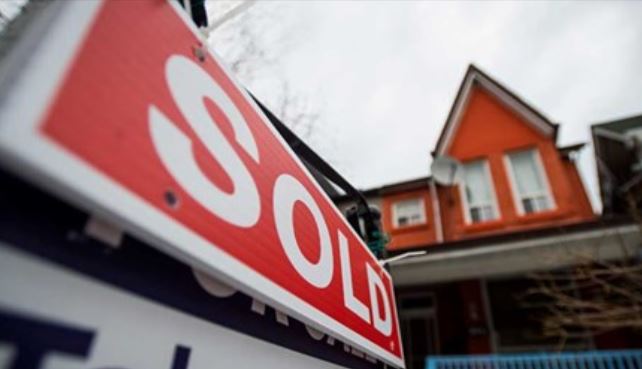 There was Good News economically speaking during the tumultuous month of March 2020. Of course this will be remembered for the major breakout of the Corona Virus. However, for those who sold their detached homes, it will be remembered for achieving the highest sales price since June 2018. Basically receiving similar price points as during the end of the frenzied Real Estate Market. 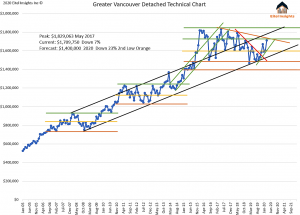 Notice on the chart, the detached average sales price in March came in at $1,709,750 testing the upper echelon of the current Market Cycle.

The Bad News, this will not be a long lived reality. Prices will be coming off with gusto in the upcoming months. Again notice on the chart in the text box, Eitel Insights anticipates the market to test the 1.4 million pricing threshold during 2020. At that price point the market would have corrected a total of 23% from the peak and down 16% from the latest data point.

For the 1.4 Million average sale price to become a reality the uptrend which began in July 2019 at 1.494 Million would need to be broken (Green uptrend). Additionally a breaking of the prolonged uptrend established in 2008 at $750,686 Black Prolonged Uptrend). The 1.4 Million price point would bring the data to the lowest orange line in the current Market Cycle.

Good News, the buyers who have looked but not touched, will be rewarded with ever lowering price points. Along with increased inventory to choose from.

Bad News, the sellers who chose the two birds in the bush rather than the one in the hand will inevitably chase the market lower, continually searching for those darn birds. 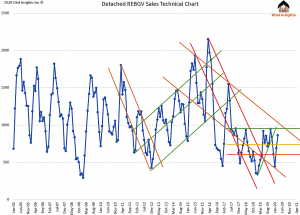 The sales numbers for March 2020 will be shocking until I explain. There were 862 sales in the detached market across Greater Vancouver. Which puts the market technically near the high mark of the current Market Cycle.

The explanation, technically there were not 862 sales in March, there were however 862 completions. The way the REBGV counts the sales data is not on accepted offers in the month but rather on deals that have completed at land titles. Meaning the 862 sales occurred in different months but the key exchange took place in Mach.

Point of interest the price points are taken from the accepted offers in that particular month, while the sales totals are from previous months accepted offers. An odd fact but worth point out from time to time. This also means the upcoming months of sales numbers could continue to be higher than the actual activity transpiring. 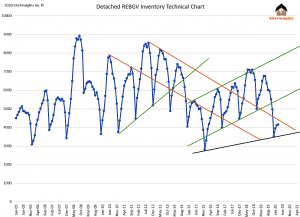 The inventory onslaught is assuredly on the way. As Eitel Insights has been advising for the past quarter or more, is to beat the crowd. Sellers who listened had achieved the highest sales price in the previous 21 months. While prices will not continue the uptrend, the prices now have to be better than what will be offered in the upcoming months and year(s).

We advise home owners to be observant of their current situations, play out our base case of a 18% (correction stops at 1.4 Million) decline to your home’s current value. Add in a possibility of the market correcting an additional an 28% (correction continues to 1.225 Million) from here. If either of those realities put you into foreclosure, sell now get out with your skin, and put the money in the bank. If you see the train coming at you, merely get off the tracks.

Another thought, if the idea in the upcoming years is to downsize. Sell now, achieve the highest price you can, rent for a couple years. Then purchase the Condo when the market is at the lowest price point in 2022. This is the best situation to be in as the market sits right now. Nothing wrong with selling high and buying low.

Not all markets in Greater Vancouver are created equal, some areas are closer to the bottom. While others still have significant percentage losses upcoming. Become an Eitel Insights client to find out which are which. www.eitelinsights.com