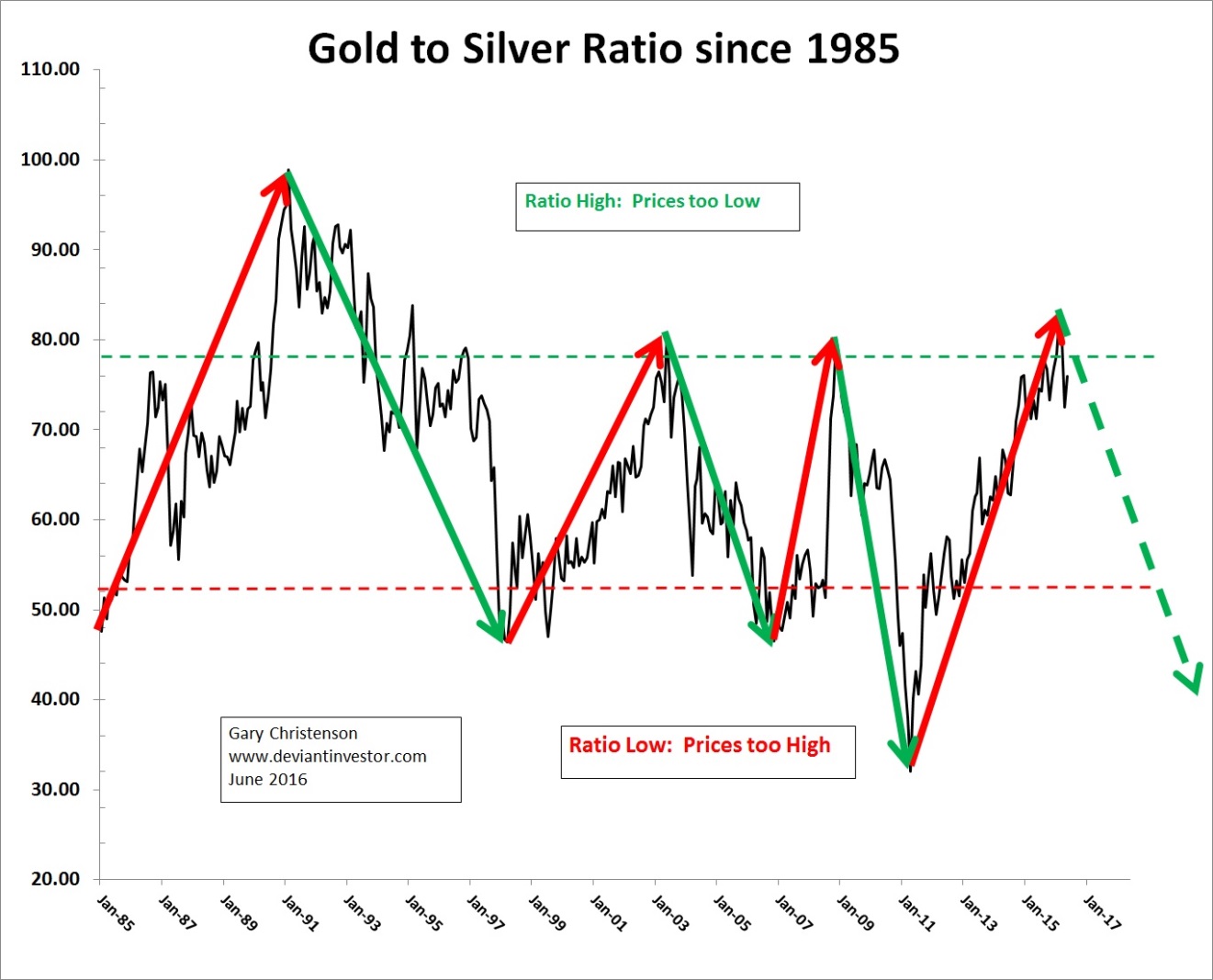 Examine the 30+ year graph of the gold to silver ratio – this is the Big Picture perspective.

The ratio moves from low to high and back to low in long term patterns. I have shown the large scale moves with red (up) and green (down) arrows. How does the Gold to Silver ratio indicate future prices? Examine the chart (below) of the ratio and silver. You can see a negative correlation between the ratio and the price of silver (gold also but not shown). When gold and silver prices are high, such as in 2011, silver has moved up a much larger percentage than gold, so the ratio drops into the 30 to 50 range. When prices are low, such as in December of 2015, silver has fallen far more than gold so the ratio is high – near or above 80. Since 2001 there have been three major highs in the ratio, which corresponded with LOWS in gold and silver prices. I have placed green ovals around the ratios when they exceeded 75 on the monthly data chart. When the ratio exceeds 75 and subsequently crosses below the moving average, a long term buy looks safe and profitable. This is not helpful for short term traders. But if you are a stacker, then buy gold and silver when the ratio has reached an extreme, such as 75 or greater, and is declining.

Note that the ratio as of May 31, 2016 was 75.9 and declining from a high of 82.9 reached in February 2016, using monthly data. Per the gold to silver ratio and 30 years of history, 2016 has been a good time to buy gold and silver. The daily prices for gold and silver bottomed in December 2015 and should rally for several, probably many, years.

But Could Gold and Silver Fall Further?

There are few guarantees in life beyond death and taxes, but continued currency devaluations, increasing debt, and higher gold and silver prices seem inevitable. Act accordingly.

Bill Gross has mentioned a “supernova” explosion in the debt markets. If $10 – $40 Trillion in debt collapsed down to near its intrinsic value, the shock, panic, and fear could push gold and silver prices into the stratosphere. Act accordingly.

If the Fort Knox gold is gone … as I speculate in my novel “Fort Knox Down!” the prices for gold and silver could also rise spectacularly. Book is available at Amazon and gold and silver are available, for now, from the usual retailers.

Gold Stocks vs The Dow