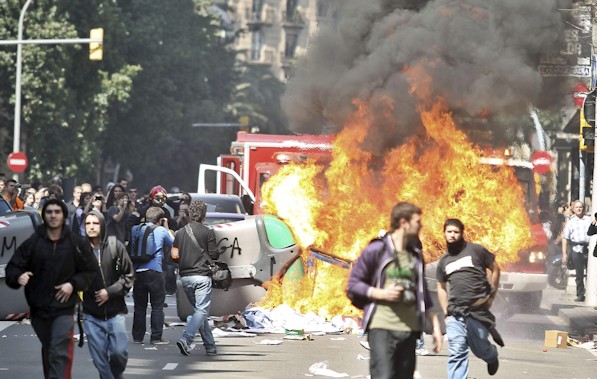 Michael Campbell in his Nov 10th Money Talks commentary below asserts that the re-election of Obama reinforces his belief in “the financial incompetance of Government and all of the consequences as the primary force in the years to come”.

Nigel Farage MEP (Member European Parliament) gives us an insight of what to expect in years to come with these observations:

“Strikes, strikes, strikes.  Lots and lots of strikes and demonstrations.  Big strikes today, all across the Mediterranean, but they are now beginning to permeate northwards.  In fact, there has been a very major strike in Belgium today.”

“I was actually due to go to the European Parliament today but couldn’t get there.  No planes, no trains.  Ostensibly the strikes are about protests to government austerity.  Strikes are now becoming an almost everyday feature of life in Europe”.

“If people haven’t got hope, through their own directly elected representatives, then all they can do is take to the streets in increasing numbers, and these aren’t peaceful strikes….these aren’t just people walking down the road carrying banners.  We’re talking here about tear gas, rubber bullets, violence, lots of injuries.  This is very, very nasty stuff, and I see absolutely no prospect of it ending in the short-term.”

“I think the biggest worry is that we get some kind of total breakdown of confidence in society.  Of trust, in not just the government, but the police force and the army and everything else.  I genuinely fear that we are going to see very large scale confrontation in Southern Europe with an awful lot of people getting hurt or killed.  That’s my biggest fear”.