The Future of Greece and Gold 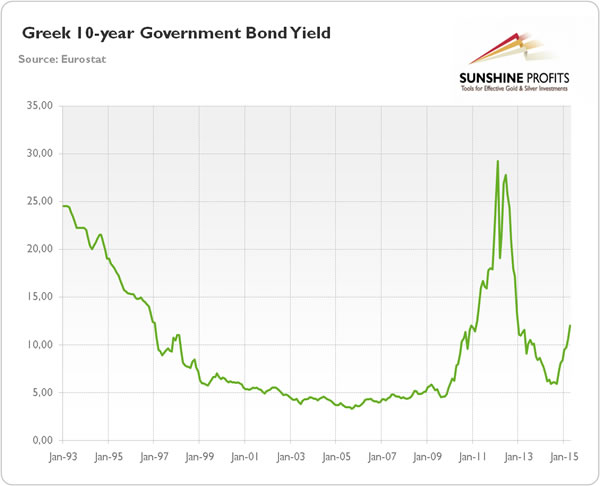 What are the possible scenarios for Greece and what do they imply for the gold market? The base-case scenario is that a bailout deal will be reached in coming days since no one wants the Grexit. Without the agreement, Greece would lose access to its external funding (like current bailouts funds, Eurozone’s crisis fund, IMF’s support or ECB’s Emergency Liquidity Assistance), whilst creditors risk Greece’s default, financial contagion and the loss of the euro’s prestige. However, both sides took tough positions, since Syriza does not want to disappoint its voters and does not believe in austerity policy, especially during recession, while creditors believe that the Eurozone is immune to possible Grexit. It is true that Greece and its creditors can only play the game of chicken to negotiate the best agreement and save face before their respective voters, but at this point, any mistake in negotiations can trigger a new crisis in Europe and increased volatility on the forex market.

Grexit is clearly the worst-case scenario; and its probability increased recently. Recently, Nomura’s analysts put the probability of a Grexit at 40 percent, while Germany’s Commerzbank forecasts are even worse – 50 percent. The yield on the two-year Greek bonds surged more than 250 basis points to 23.68 percent in May, while the Greek yield curve is inverted, which means that investors are expecting a default. As can be seen in the chart 1, the 10-year government bond yield has been rising for the last few months. What would the Grexit look like? The bailout deal is not reached and the Greek government is cut off from international liquidity. Then the ECB suspends ELA and stops accepting Greek bills as collateral, which limits the ability of Greek commercial banks to buy bills and finance government. Without any money, the insolvent state and its banking system would have to default, exit the Eurozone and return to the Drachma (or, at least, introduce a parallel currency in the form of IOUs – a paper saying that its holder would receive a certain number of euros at a certain point in time in the future). To prevent bank runs (which gained pace in recent weeks as the Greek bank deposit shrank by €4.6 billion in April to €133.6 billion, the lowest level since October 2004), then capital controls would be introduced.

Then Greece would shake off the debt burden and could devalue its new-old currency to make exports more competitive, while its banks would be recapitalized in the drachma. The Greek depositors and generally citizens would lose, as well as Greek debt holders; however the Greek debt is currently held mainly by official institutions (EU, ECB and IMF). Because Greece is not really indebted to the banks and other financial institutions, the direct contagion due to the default will be limited.

However, there would be significant indirect consequences. A Grexit could set a precedent and induce other countries to leave the Eurozone, especially since the rise in risk aversion would increase the interest rates on debt of other PIIGS countries like Portugal, Italy or Spain. As the Greek minister of finance Yanis Varoufakis said, “Once the idea enters people’s minds that monetary union is not forever, speculation begins… ‘who’s next?’ That question is the solvent of any monetary union. Sooner or later, it’s going to start raising interest rates, political tensions, capital flight.” In other words, the Grexit would destroy the reputation of euros as a strong and stable currency, which would fall against the U.S. dollar. Further appreciation of the greenback would be the headwind for the gold prices; however, it could drag on U.S. economic growth and postpone or soften the Fed’s tightening. Given the position of populist parties in the southern countries, the Grexit could lead to some political tensions. Another issue is Cyprus, which possibly could not remain in the Eurozone, given its dependence on Greek banks.

Undoubtedly, there are some middle ways. For example, Greece could default, while remaining in the Eurozone. It depends on whether Hellas really runs the primary surplus (according to this data, the Greek primary balance recorded a surplus of €2.16 billion over the first four months of the year) and whether the ECB will pull emergency lending assistance from the ECB for Greek banks. Another possibility is a Cyprus-like solution, i.e. the introduction of capital control with Greece remaining in the Eurozone.

What are the possible effects of the above scenarios on the gold market? The Grexit should be the most supportive for the gold prices, since it could trigger financial and political contagion difficult to predict and, thus, raise fears and safe-haven demand for gold. According to Capital Economics, the risk of a Grexit could help lift gold price to $1,400 by the end of 2015. Naturally, whether this will really be the case depends on many other factors as well.

The default without the exit from the Eurozone would also increase the risk aversion and uncertainty about the credibility of other European debtors. Capital controls or a Cyprus-like solution should also spur safe-haven demand for gold, as it was in 2013, when the Cypriot banking crisis drove demand for gold. In all cases the potential rise in gold prices would be limited by the U.S. appreciation. If the bailout is reached, gold will not be supported. However, a new rescue package (without radical economic reforms) will not solve any of the problems of Greece, it will just buy some time, so the support for the gold prices will come later.

To sum up, the Eurozone is a political project, economically unstable as it is a classic tragedy of the commons. Its misconstruction encouraged Greece’s imprudent fiscal policy which led to the current debt crisis. Because a sustainable solution is not possible without substantial reforms in Hellas, which are not likely to happen, given the Syriza’s socialist stance, and the return of recession in Greece, it seems that concerns over Grexit will support gold prices in the future. Right now, the global risk appetite is still high. However, that may soon change.

If you enjoyed the above analysis, we invite you to read the full version of this report – in our June Market Overview report we analyzed the relationship between Hellas’ problems and the gold market, as well as possible scenarios for the Greece’s crisis. We also encourage you to stay updated on the latest gold-related global developments by joining our gold newsletter. It’s free and you can unsubscribe anytime.