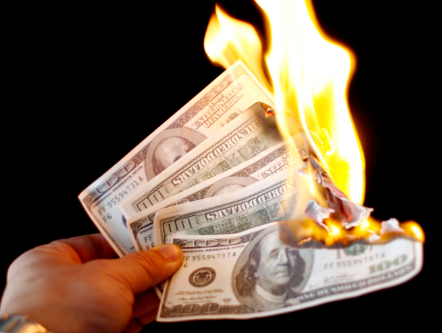 Physics students study mechanical systems in which pulleys are massless and frictionless. Economics students study monetary systems in which rising prices are everywhere and always caused by rising quantity of currency. There is a similarity between this pair of assumptions. Both are facile. They oversimplify reality, and if one is not careful they can lead to spectacularly wrong conclusions.

And there are two key differences. One, in physics, students know that pulleys have mass and friction, and graduate to a more sophisticated understanding. Two, the Quantity Theory of Money (QTM) is not a simplified view of reality. It is oversimplified, to be sure, but it is a false theory.

QTM leads one to think that the groceries you can buy with a dollar are intrinsic to the dollar itself. And this leads to the idea that, the lower the dollar goes, the easier it would be to pay dollar debts. Returning to our physics analogy, pulleys are not massless and frictionless. And the value of the dollar is not 1/P (purchasing power).

We have written a lot about when government forces businesses to pay for things that their customers do not value, and do not usually even know about. We deem these things useless ingredients. Consider an example. Suppose the federal government got more serious about the Americans with Disabilities Act, and they no longer allow noncompliant restaurants and bars to remain grandfathered under the old code. All of these businesses now must spend a lot of money getting compliant, and reducing their revenue-generating floor space for the sake of much larger bathrooms. This does not cause prices to rise, directly. If restaurants could charge more, then they would already be charging more…CLICK for complete article