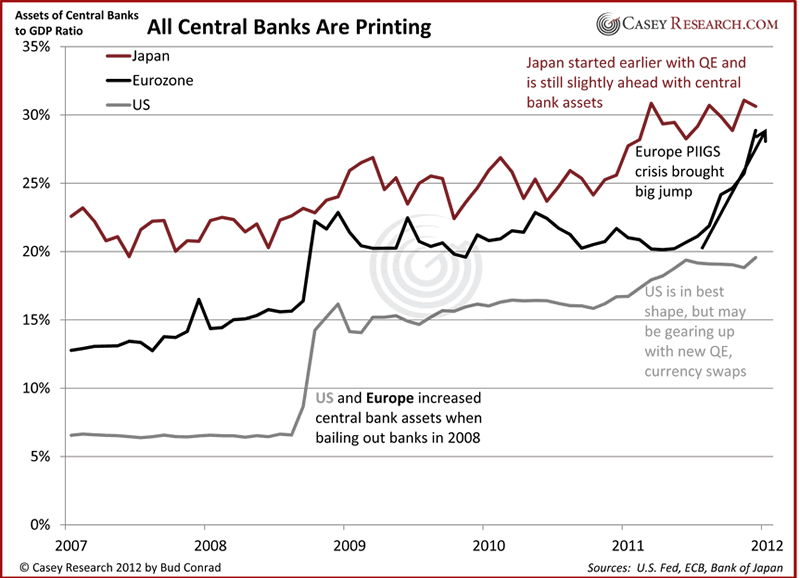 The Federal Reserve recently announced important policy changes after its Federal Open Market Committee (FOMC) meeting. Here are the three most important takeaways, in its own words:

2.The Committee judges that inflation at the rate of 2 percent, as measured by the annual change in the price index for personal consumption expenditures, is most consistent over the longer run with the Federal Reserve’s statutory mandate. In the most recent projections, FOMC participants’ estimates of the longer-run normal rate of unemployment had a central tendency of 5.2 percent to 6.0 percent.

The first item is the most important as it was not expected – and it had an immediate effect on markets. As seen in the chart below, gold spiked higher on the surprise news of extending the zero-rate policy through 2014. The news prompted a similar jump in silver services: Keeping rates low requires the Fed to print new money to buy Treasuries, so the dollar weakened against the euro, although the reaction wasn’t as big as in those in the gold and silver markets. This is partially due to the fact that the ECB is on its own campaign of printing money. The promise to keep short-term rates low for a longer period also caused longer-term rates to fall slightly, as seen in the 10-year Treasury rate chart below, which fell from about 2.05% to 1.95 %, a relatively modest decline. The most important action of the three was to extend the zero Fed funds rate to the end of 2014. This is a form of easing that could affect more rates than just short-term rates. Furthermore, there is a debate as to whether the action was the result of the Fed’s concern about the economy slipping back into recession. Or, this could also be a bullish sign for the economy and stock market, as the guaranteed low rates could increase investment to improve our economy. Zero rates drive investors to take on risks – such as buying stocks – to gain higher returns. As a result, this induces more investment toward riskier parts of the market, which might otherwise be underfunded. Though the Fed aims to stimulate the economy, we’re more likely to see a slip back into recession rather than see an effective Fed stimulus improving the economy.

The press conference suggested that quantitative easing (QE) remains on the table. As a result, new targeted asset purchases by the Fed are likely in our future. These additional purchases with newly printed money could become inflationary. That is why gold shot higher and the dollar weakened in the short term.

Both the Fed and the ECB have decidedly less-hawkish members and leadership than just last year. Both have now moved toward more money printing to keep rates low. The chart of central bank balance sheet as a ratio to GDP shows that the central banks of the world are clearly “printing”:

The problem with printing money and promising to do so for years ahead of time is that the negative consequences of inflation only happen after a delay. As a result, it’s difficult to know if a policy has gone too far until years down the road at times. Unfortunately, if confidence in the dollar is lost, the consequences cannot be easily reversed. One problem for the Fed itself is that it holds long-term securities that will lose value if rates rise. The federal government faces an even more serious problem when interest rates rise, as higher rates on its debt mean greater interest payments to service. Due to this federal-government debt burden, the Fed has an incentive to keep rates low, even if the long-term result is higher inflation. However, for now the Fed’s statement suggests it sees inflation as “subdued,” so it’s putting those concerns aside for now.

Along with the promise of low rates, the Fed for the first time gave an inflation target of 2%, as measured by Personal Consumption Expenditures. The actual and target inflation show that the Fed is currently not under major pressure from missing its target… not yet. The Fed has not even tried to set a target for the unemployment rate, which is only expected to edge below 8% by 2013. The Fed says that that the longer-run unemployment range is 5% to 6%. The big difference from the current level of 8.5% indicates that the Fed faces a greater challenge with unemployment than inflation now. My conclusion from the Fed’s actions is that it doesn’t care as much about its inflation target as it does about improving the unemployment rate. Thus, it will err on the side of letting inflation rise, if it would improve unemployment. But holding rates too low too long fueled the housing bubble. Repeating the same game will have consequences of malinvestment in the form of new bubbles in the economy. The Fed hopes to restore employment before the negative consequences of loose monetary policy show up.

The Fed provided the accompanying chart of the Fed funds rates expected by the seventeen members of the FOMC. Each dot indicates the value (rounded to the nearest quarter-percent) of an individual participant’s judgment of the appropriate level of the target Federal funds rate at the end of the specified calendar year. Over the long run, the Fed expects the funds rate to rise to around 4.25%. Eleven of the members indicate that the rate will rise before 2015. Only six expect the rate to stay close to zero through 2014. The above chart should not be taken very seriously, as Fed predictions have been notoriously inaccurate. Furthermore, it’s likely that rates will rise before 2014 as a result of market forces pushing them upward due to mistrust of the currency – measured by rising gold and commodity prices.

The Federal Reserve balance sheet expanded dramatically as the credit crisis became acute in 2008. The Policy Tools (shown below in black) grew by $2 trillion with the QE1 purchase of mortgage-backed securities and the QE2 purchase of long-term Treasuries. This was an unprecedented effort to support those markets, provide liquidity, and drive rates down to zero. A simple extrapolation of similar expansion policies to the end of 2014 suggests that the Fed may require an additional $2 trillion to extend its goals. The problem is that such action would surely weaken the dollar and drive gold much higher. If confidence is lost, rates could rise even as the Fed continues to print and buy securities. The Fed says that it will change its policy if conditions warrant. I think they will be forced to stop this policy well before 2014 is over. Nonetheless, in the meantime, they will plant the seeds of rising prices with ultralow rates. The gold price is driven by Fed policies and its bias toward printing money rather than defending the dollar’s purchasing power. This Fed bias was again reconfirmed by this announcement. With all the Fed’s renewed vigor toward keeping rates low longer, we can once again reconfirm the ongoing downward slide for the dollar. As a result, gold remains the best investment against the damaging government deficits and central bank policies around the world.

While the dollar may look good compared to the other fiat contestants on the global money stage, the United States’ debt situation is untenable – and various factors could bring it to its knees faster than anyone expects. Don’t let it burn you: learn how to protect yourself and your assets.]

Disclaimer: The above is a matter of opinion provided for general information purposes only and is not intended as investment advice. Information and analysis above are derived from sources and utilising methods believed to be reliable, but we cannot accept responsibility for any losses you may incur as a result of this analysis. Individuals should consult with their personal financial advisors.