The Fed Meets This Week Dealing With Alarming Bond Bubble 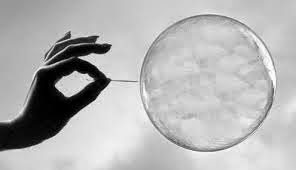 The 10-Year Bond now has a Yield of 2.08% right before the all-important Fed Quarterly Meeting and Press Conference this Wednesday, the 10-Year basically lost 24 basis points in a week, and mind you the week right after the strongest Employment Report (a positive 321,000 jobs added for the month) since the Financial Crisis, capping what has been a remarkable year in added jobs to the US economy, even wages spiked 0.4 % with strong upward employment revisions for the prior months. In short, in a normal functioning Bond Market Yields should be rising with improved economic conditions. Especially in a week with a robust Retail Sales Report up 0.7 % for the month. Bond Yields in the US should be much higher given the strong economic performance for 2014, and the Fed not only exiting QE, but about to start raising rates in 2015.

Too Much Cheap Money Sloshing Around Financial Markets

In short there is just way too much liquidity in the system, and buying of any assets is what follows regardless of price or the fundamentals, and the Bond Market is such a bubble right now that the Fed needs to start pricking it fast before it crashes all at once where everyone tries to get out at the same time, which of course they cannot do. This is where a responsible Fed comes in and prepares the Bond Market for the inevitable Rate Hikes in 2015. (more on this subject Low Rates and QE are Deflationary at the Zero Bound)
Low Gasoline Prices are Inflationary in the Big Picture
The latest argument for inflating the bond market bubble has been the drop in oil prices indicating strong deflationary pressures but this is just a poor understanding of economic theory. High oil and gasoline prices are deflationary over the long-term whereas low oil and gasoline prices are stimulative for economic growth, and actually inflationary over the long-term. And I think the Fed economists are sophisticated enough to get this relationship, that in fact lower gasoline prices will add to GDP growth in the coming quarters, and put even more pressures on inflation with a transfer from the bad comps of energy prices year on year, over to other core components as this new found wealth by consumers in the form of a massive tax cut finds its way into other buckets like dining and retail expenditures, all of which have additive effects for the US economy. In short cheaper energy costs are a net positive for the global economy, it leads to more productive and sustainable economic growth.

Watch out for wages, they have been bubbling under the surface for a while, slowly rising underneath everyone`s negative outlook on the subject, and with an ever tightening labor market this is the area to watch for real runaway inflation in the economy. A 0.4 % spike in wages for a month is something to take notice of, for example extrapolate this on an annual basis and 0.4 % adds up real quick to runaway inflation. So expect there might be a slight lag as consumers feel comfortable with the extra money in their pockets but eventually this money finds its way into other spending buckets so there should be a transfer from the energy component to the core inflation reading.
Oil Bubble Bursts, Next Up Bond Markets
It is obvious that there is too much liquidity in the financial system as essentially bonds and stocks are near their all-time highs at the same time, and oil would have been there too if it wasn`t for the fact that 7 years of QE artificially inflated high oil prices motivated a lot of people to start producing oil in the US and around the globe and we finally have an oversupplied oil market and essentially a price war to compete for global market share. The old adage there is no cure for high prices like high prices applies here. And there is no cure for low wages like low wages in a tightening labor market, and this is the inflation boogie man that is currently flying under the radar right now in financial markets.
US Economy Running Hot
An economy cannot add this many jobs in a year without market consequences, and so far the bond market has been able to do what it wants which is take advantage of cheap money and chase yield at any price without regards to downside risks. We are already seeing signs of the tightening labor market here in the US as employees are now quitting their jobs to take advantage of better opportunities in the labor market, this is all indicative of higher wages and increased inflation pressures in the economy for 2105.
Much Lower Oil & Much Higher Interest Rates as Lower Oil is Stimulative
The low oil prices means the Fed never raises rates argument is just flawed, look back in history of $30 a barrel oil, the economy wasn`t in a “deflationary death spiral” in fact it was quite robust and interest rates and bond yields were much higher by a large margin than these “Doomsday Recession Era” Rates that we currently have in the massive bond market bubble.
All Bubbles Burst – No Cure for Financial Bubbles like Financial Bubbles
The only reason this bond bubble exists isn`t due to the lower price of oil, it is directly a result of too much cheap liquidity in the financial system and ridiculously low interest rates by central banks. Well the US economy by recent data points with 321,000 jobs created in a month, 0.4% monthly wage inflation, third quarter GDP revised up to 3.9%, Retail Sales Report up 0.7 % and lower gasoline prices adding additional stimulus to the US economy means the Fed will have to raise rates in bunches for 2015, and it is increasingly alarming that the bond market is as unprepared as a market can be going into this rising rate environment for 2015.