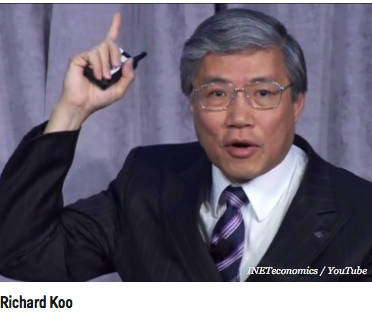 The Federal Reserve has kept its benchmark interest rate near zero for years in its effort to stimulate job growth and stoke inflation in the post-financial crisis world.

But with job growth looking healthy and some signs that inflation could soon heat up, Fed Chair Janet Yellen and her colleagues have been preparing the markets and its participants for tighter monetary policy via an initial rate hike.

“Given the importance of getting the timing right, the FOMC needs to be absolutely sure that tightening is the right thing to do,” Nomura’s Richard Koo writes. “On this point, three of the members on the rate-setting committee have already argued that the Fed should tighten, while Chair Yellen and the rest of the members believe the start of this long 375bp journey is similar to a rocket launch in that all conditions need to be favorable.” “Interestingly, these people are referring to the first rate hike as “lift-off,” which is the term used to describe the moment the rocket leaves its launching pad,” Koo wrote. “This is an indication of how careful the Fed will have to be when pushing the button on a rate increase.”

Koo argues it’s important that this path to monetary policy normalization be steady as she goes, or we could see trouble.

“Once the Fed begins its mechanical tightening process, stopping before the goal is reached could upset the markets,” he wrote.

Currently, most economists believe the first rate hike will come June of this year. But there are plenty of economists who would argue that the Fed should put this first move off until later this year or even early 2016.