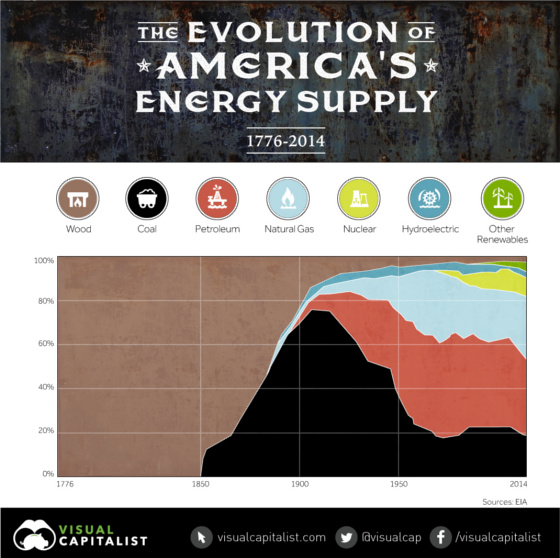 The Energy Information Administration (EIA) recently released data on the history of America’s energy supply, sorted by the

share of each energy source. We’ve taken that data to create the chart associated with today’s post.

Related Topic: Mapping Every Power Plant in the United States

The early settlers to North America relied on organic materials on the surface of land for the vast majority of their energy needs. Wood, brush, and other biomass fuels were burned to warm homes, and eventually to power steam engines. Small amounts of coal were found in riverbeds and other such outcrops, but only local homes in the vicinity of these deposits were able to take advantage of it for household warmth.

During the Industrial Revolution, it was the invention of the first coal-powered, commercially practical locomotives that turned the tide. Although wood would still be used in the majority of locomotives until 1870, the transition to fossil fuels had begun.

Coke, a product of heating certain types of coal, replaced wood charcoal as the fuel for iron blast furnaces in 1875. Thomas Edison built the first practical coal-fired electric generating station in 1882, which supplied electricity to some residents in New York City. It was just after this time in the 1910s that the United States would be the largest coal producer in the world with 750,000 miners and blasting 550 million tons of coal a year.

The invention of the internal combustion engine and the development of new electrical technologies, including those developed by people like Thomas Edison and Nikola Tesla, were the first steps towards today’s modern power landscape. Fuels such as petroleum and natural gas became very useful, and the first mass-scale hydroelectric stations were built such as Hoover Dam, which opened in 1936.

The discovery and advancement of nuclear technology led to the first nuclear submarine in 1954, and the first commercial nuclear power plant in the United States in Pennsylvania in 1957. In a relatively short period of time, nuclear would have a profound effect on energy supply, and it today 99 nuclear reactors account for 20% of all electricity generated in the United States.

Related Topic: What it Takes to Power New York (Slideshow)

In more recent decades, scientists found that the current energy mix is not ideal from an environmental perspective. Advancements in renewable energy solutions such as solar, wind, and geothermal were made, helping set up a potential energy revolution. Battery technology, a key challenge for many years, has began to catch up to allow us to store larger amounts of energy when the sun isn’t shining or the wind isn’t blowing. Companies like Tesla are spending billions of dollars on battery megafactories that will have a great impact on our energy use.

Today, the United States gets the majority of its energy from fossil fuels, though that percentage is slowly decreasing. While oil is still the primary fuel of choice for transportation, it now only generates 1% of the country’s electricity through power plants. Natural gas has also taken on a bigger role over time, because it is perceived as being cleaner than oil and coal.

Today, in 2015, wind and solar power have generated 5% and 1% of total electricity respectively. Hydro generates 7%.