The Energy Chart You’ve Got to See! 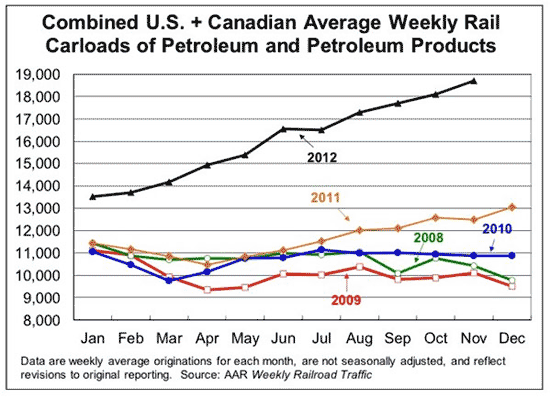 You have to continually think outside the box when you’re investing. That’s because, too often, thinking inside the box is a good way to get nailed into a coffin.

When you follow along with everyone else, you risk jumping in too late and your potential profits getting nailed flat. But if you try to think about profit possibilities BEFORE the mass herd of investors catches on, you can find yourself walking on sunshine while the other guy is pushing up daisies.

For example: How many investors know that America’s oil-and-gas boom is also causing a railroad boom?

That might seem counter-intuitive. After all, oil travels by pipeline, not railroad—right?

First of all, it takes a long time to build pipelines. So, energy producers are shipping a lot of product by rail while they wait for new pipelines to be built.

Second, pipelines, especially the ones coming from Canada, are stuffed to the gills.

Enbridge Energy Partners (EEP), which controls a big bunch of pipelines shipping oil and gas from Canada to the U.S., says that those pipes can’t take one more barrel than they’re already carrying.

“All of the crude oil export pipelines are pretty much full, running at maximum capacity,” Vern Yu, a vice-president of business development and market development for Enbridge, told a Petroleum Technology Alliance of Canada conference in November.

That was November. Now, it’s SO BAD that Canadian crude recently traded at a $41 discount to West Texas Intermediate. That’s near the record discount of $42.50, which was hit in December.

Why is Canadian crude so cheap? Because there is so much of it, there’s no way—rather, no easyway—to move all of it to market.

And that brings us to railroads. It costs about $10 more per barrel to move oil by railroad compared to pipeline. But when Canadian crude is trading at a $41 discount, that’s not a steep price at all!

More than 200,000 train cars of oil will be shipped in 2013, the most since World War II, according to forecasts from the Association of American Railroads. About 1 million barrels a day of rail-unloading capacity is being built in the United States. That’s more than DOUBLE the current level of shipments, the AAR says.

In fact, it’s getting so lucrative to move oil by railroad that oil and nat-gas pipeline operators are getting into the act. A group of them spent $1 billion on rail-depot projects recently to help move crude from inland fields to refineries on the coast.

The Oil Production Chart You’ve Got to See! That’s right, U.S. oil production topped 7 million barrels per day for the first time since March 1993, a figure that is nearly 20% above the amount produced at this time last year.

How much oil do you think we’ll be producing by the end of this year? Or the end of next year?

I don’t know the exact number, but we can assume that it will be more.

I do know that the International Energy Agency says the U.S. will produce more oil than Saudi Arabia by 2017 … and I think they’re being rather conservative.

2 Ways to Play It … And
What to Stay Away From!

If the pipelines are full, obviously pipeline operators are going to be rolling in dough. Plus, we can expect that there’s going to be consolidation in that industry.

Also, railroads are an obvious play.

One thing you should consider staying away from (at least for now): oil producers.

I do think there are some real values out there. But the producers have to be able to move their product to the refineries on the coast. And unless you’re willing to do the homework to find out which companies can do that, you’re better off staying out of that sandbox. After all, you don’t want it to be your investing coffin.

However, I’m doing this legwork all the time …even literally, as I make it a point to visit the companies and the people behind them to make sure what looks like a solid investment from afar looks just as good up-close.

So if you’re willing to get ahead of the herd … if you’re curious about the global transformation in energy and how you can cash in … you can get my buy and sell alerts sent straight to your inbox. All you have to do is make the trades and grab the gains!

Click here now to see how you can secure your risk-free trial to my Red-Hot Global Resourcesservice today for a very special price!

P.S. Energy stocks are moving up. But making money on them means grabbing the right companies, at the right time, to get the biggest-possible return.

Frankly, that’s why I think the best investment you can make right now is to join my Red-Hot Global Resources service. It’s a small purchase now that can pay off easily in just one strategically placed trade. Don’t wait—claim your membership spot today for a special introductory price!