The End of Tapering & Gov’t Funding 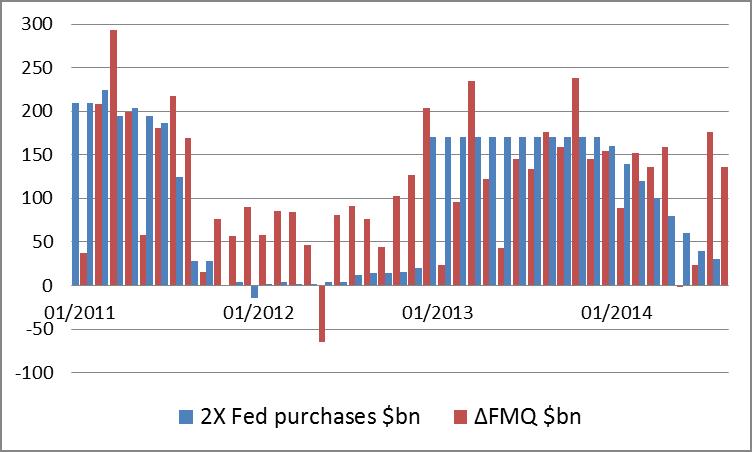 With Michael Campbell asking Martin Armstrong tomorrow to find out “what his model says about the bond market” in will be interesting to see if Martin’s work supports this analyst’s opinion that its:

The end of tapering and government funding

Last year markets behaved nervously on rumours that QE3 would be tapered; this year we have lived with the fact. It turned out that there has been little or no damage to markets, with bond yields at historic lows and equity markets hitting new highs.

This contrasts with the ending of QE1 and QE2, which were marked by falls in the S&P 500 Index of 9% and 11.6% respectively. Presumably the introduction of twist followed by QE3 was designed at least in part to return financial assets to a rising price trend, and tapering has been consistent with this strategy.

From a monetary point of view there is only a loose correlation between the growth of fiat money as measured by the Fiat Money Quantity, and monthly bond-buying by the Fed. FMQ is unique in that it specifically seeks to measure the quantity of fiat money created on the back of gold originally given to the commercial banks by our forebears in return for money substitutes and deposit guarantees. This gold, in the case of Americans’ forebears, was then handed to the Fed by these commercial banks after the Federal Reserve System was created. Subsequently gold has always been acquired by the Fed in return for fiat dollars. FMQ is therefore the sum of cash plus instant access bank accounts and commercial bank assets held at the Fed.

The chart below shows monthly increases in the Fed’s asset purchases and of changes in FMQ. The reason I take twice the monthly Fed purchases is that they are recorded twice in FMQ. The chart shows that the creation of fiat money continues without QE. That being the case, QE has less to do with stimulating the economy (which it has failed to do) and is more about funding government borrowing.

Thanks to the Fed’s monetary policies, which have encouraged an increase in demand for US Treasuries, the Federal government no longer has a problem funding its deficit. QE is therefore redundant, and has been since tapering was first mooted. This does not mean that QE is going to be abandoned forever: its re-introduction will depend on the relationship between the government’s borrowing needs and market demand for its debt.

This analysis is confirmed by Japan’s current situation. There, QE coincides with an economy that is deteriorating by the day. One cannot argue that QE has been good for the Japanese economy. The reality behind “abenomics” is that Japan’s government is funding a massive deficit at the same time as savers are drawing down capital to cover their day-to-day living requirements. In short, the funding gap is being covered by printing money. And now the collapsing yen, which is the inevitable consequence of monetary inflation, threatens to expose this folly.

On a final note, there appears to be complacency in capital markets about government deficits. A correction in bond markets will inevitably occur at some point and severely disrupt government fund-raising. If and when this occurs, and given that it is now obvious to everyone that QE does nothing for economic growth, it will be hard to re-introduce it as a disguised funding mechanism for governments without undermining market confidence.