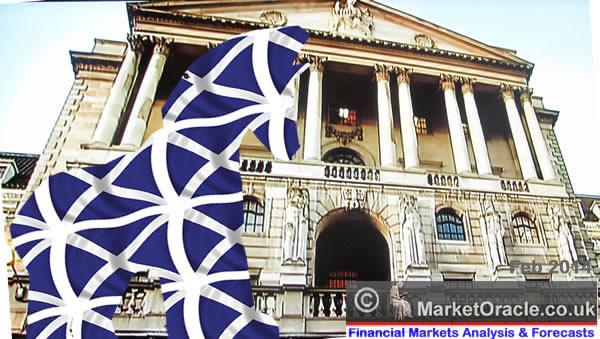 There is PANIC in the air as the NO Campaigns 20% opinion poll lead at the start of 2014 has now completely evaporated as the YES campaign edges into the lead with just 12 days to go.

“Whether the 300 year old United Kingdom lives or dies will be determined by as few as 4.5% of the British electorate on September 18th as only the people of Scotland, some 9% of the UK electorate have been afforded the luxury of deciding what happens to the United Island of Great Britain, and that if the tunnel visional nationalist have their way they would succeed in setting in motion its termination starting the morning of 19th of September when the world that Brit’s have know for centuries starts to unravel.”

Is your portfolio’s fate dependent on Scotland’s? Why is it that when a place known for haggis, kilts and bagpipes indicates it might want to be independent, the markets pay attention?

The usually rather boring pound sterling jumped to life in recent days, becoming one of the world’s most volatile currencies. The trigger was a poll that suggested that the pro-independence camp in Scotland might hold the upper hand in the September 18, 2014 vote. Until recently, that event risk had not been priced in. All else equal, greater volatility warrants a lower price for an instrument (a security or currency). Prudent risk management takes into account the riskiness of the instrument.

Before we discuss specifics for Scotland, I would like to remind everyone that we are literally asking to be surprised by event risks of this sort in general as markets have been rather sleepy- evidenced by low volatility. In our assessment, this lull is a direct result of quantitative easing and related efforts by central bankers around the world that make risky assets appear less risky. Except, of course, the world is a risky place. So when something does pop up, the markets are taken by “surprise.” Just as the sterling fell sharply, the same could happen to the S&P 500 or any other investment. After all, keep in mind that the independence vote is not news; neither is the fact that the yes-vote has been gathering steam. In this complacent market environment risks are being suppressed until they can’t be ignored any longer – then they break out with a vengeance. It’s in this context that investors may want to stress test their portfolios in general- the lack of volatility in your portfolio may be deceiving.

Event risk means that once the event is over, reality ought to settle in. If the vote is NO, i.e. Scotland remains part of the UK, it might cause a relief rally in the sterling. However, if the vote is YES, the outcome isn’t all that obvious. Notably, while everyone is now glued to watching each poll, is Scottish independence, in the short-run might mean more uncertainty as it could trigger, amongst others, a challenge to Prime Minister David Cameron’s government; there’s also a lot of uncertainty around what might happen to the North Sea oil assets. But let’s not forget that Scotland comprises less than 10% of Britain’s GDP. Let’s also not forget that when a country splits up, there may be a flight of mobile capital to the stronger. While Scots rightfully show that that they do quite well based on numerous economic measures, the vulnerability remains with Scotland, as it has to play catch-up with institutions building: what happens if depositors move their deposits from Edinburgh to London? An asset-liability mismatch for the financial sector could be rather precarious as the Scottish financial system is about thirteen times Scotland’s GDP. If there is no access to a lender of last resort, it could destabilize Scotland.

The European Union, in our assessment, will initially play tough, arguing that Scotland will have to apply (and fulfill all criteria) to become an EU member, but ultimately would like an independent Scotland to become a member. Conversely, Scotland may try to take hostage some oil assets. In short, it will be haggling over haggis – a solution to many issues will be negotiated. This would take time.

There’s a silver lining in all of this:

On Tuesday, September 16, 2014, please join me for a “fireside chat.” We will make most of the hour available for you to ask questions. Please register to participate. We no longer record our webinars (the regulatory overhead is too much hassle), so join live to get answers to the questions you always wanted to ask.

If you haven’t done so, also make sure you sign up for Merk Insights. If you believe this analysis might be of value to your friends, please share it on your favorite social media site.