The End of Big Government? 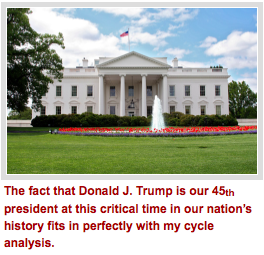 On President Trump’s first day in the Oval Office, he made good on his campaign promise to “rip up” trade deals he thinks are unfavorable to the U.S. economy by withdrawing from the Trans-Pacific Partnership trade negotiations.

And mark my words, this is only the beginning.

Not long after Trump’s election win – a surprise to most investors, but an outcome I predicted in advance thanks to my cycle analysis – I’m on record saying: “I have no doubt that he will follow through on this promise. He was clear about one goal throughout his campaign: Getting much tougher on trade relations.”

My cycles and AI models warned you to expect chaos in the global economy and financial markets, including a worldwide sovereign bond crisis. This was long before Mr. Trump even decided to run for president. The truth is, we were heading down this path no matter who became our next Commander in Chief. But the fact that Donald J. Trump is our 45thpresident at this critical time in our nation’s history, indeed in the annals of world history, fits in perfectly with my cycle analysis.

Look, this is the guy who authored “The Art of the Deal” and “The Art of the Comeback.” So make no mistake, he fully intends to use the same hard-ball negotiating tactics when it comes to a broad range of issues including:

As I said, this is just the beginning. Going forward, expect more divisive politics and social unrest that will make the million-women march look like a tea party. Ultimately, you can expect an end to the era of big government, not just in the U.S., but worldwide.

The old order that has been in place since WWII is about to come crashing down. The era in which governments amassed an unsustainable $275 trillion in total debts and obligations is quickly coming to a painful end.

P.S. We are in for five years of chaos in the economy, the markets and in our business and personal lives. As this supercycle courses through the world economy in the months ahead, the investors our governments count on for loans will snap their wallets shut. Even now, investors are reading the handwriting on the wall: Government debt is simply too massive. It can never be repaid. It would be financial suicide for them to continue loaning their money to Brussels, Tokyo or Washington; insane to throw good money after bad. And so, governments — including our own — will simply run out of money. Read more here …

Financial markets, global currencies, even our societies have been built on this shaky foundation of debt, and it’s about to topple. Over the next four years, President Trump and his policies will play a key role in these events, just as my cycles forecast.