The Effect of a Fed Rate Hike on Precious Metals 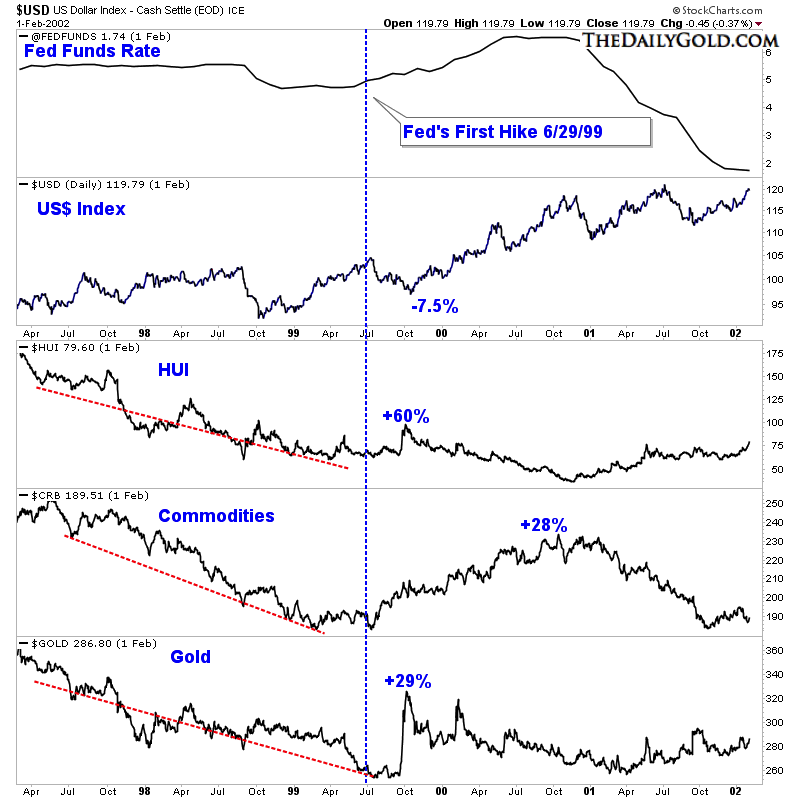 The markets have for the most part already priced in a Fed rate hike which is expected next week. Yesterday fed funds futures indicated an 80% chance of a rate hike. It would be the first hike in roughly 9 years. The Fed last began a new hiking cycle in 2004. We consult history to decipher the potential impact (of a rate hike) on the embattled precious metals sector. The Fed Funds rate increases in 1983-1984 were preceded by US$ strength but also massive rebounds in Gold and gold stocks. From mid 1982 into early 1983 Gold rebounded by 73% and the Barron’s Gold Mining Index rebounded by 210%.

The Fed Funds rate increase in 1999 is most applicable to today because it was preceded by US$ strength and steep declines in Gold, gold stocks and Commodities. (It was also preceded by strength in US equities and major weakness in emerging markets).

The chart below shows how various markets performed before and after the rate hike in summer 1999. The US$ index declined by 7.5% while Gold and gold miners surged higher. The counter-trend move lasted the longest in Commodities. Another similarity to note, albeit small,  is the gold miners (HUI) did not make a new low before the hike as Gold did. The gold mining indices (GDX, GDXJ, HUI) have essentially held support and built a base since July. GDXJ (shown below) figures to close the week in the mid $19s. If history repeats itself (with respect to Fed actions) then a rebound should begin after the hike and last for a few months. The initial target would be the 200-day moving average ($22) followed by the October high (mid $23) and the 400-day moving average ($27). A Fed rate hike could be a catalyst for a decent rebound in hard assets and in gold stocks especially. However, the key word is rebound. History argues for a rebound in the weeks to come but a rebound followed by new highs in the US$ index and new lows in precious metals. This fits with our expectation that the US$ index could surge higher in 2016 and lead to capitulation and the end of the bear market in Gold and Silver.

As we navigate the end of this bear market, consider learning more about our premium service including our favorite junior miners which we expect to outperform into 2016.