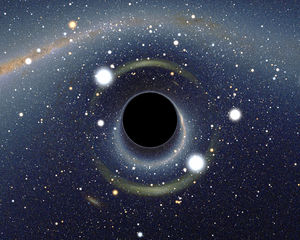 Singularity was originally a mathematical term for a point at which an equation has no solution. In physics, it was proven that a large enough collapsing star would eventually become a black hole so dense that its own gravity would cause a singularity in the fabric of spacetime, a point where many standard physics equations suddenly have no solution. Beyond the “event horizon” of the black hole, the models no longer work. In general relativity, an event horizon is the boundary in spacetime beyond which events cannot affect an outside observer. In a black hole it is “the point of no return,” i.e., the point at which the gravitational pull becomes so great that nothing can escape.

This theme is an old friend to readers of science fiction. Everyone knows that you can’t get too close to a black hole or you will get sucked in; but if you can get just close enough, you can use the powerful and deadly gravity to slingshot you across the vast reaches of spacetime.

One way that a black hole can (theoretically) be created is for a star to collapse in upon itself. The larger the mass of the star, the greater the gravity of the black hole and the more surrounding space-stuff that will get sucked down its gravity well. The center of our galaxy is thought to be a black hole with the mass of 4.3 million suns.

I think we can draw a rough parallel between a black hole and our current global economic situation. (For physicists this will be a very rough parallel indeed, but work with me, please.) An economic bubble of any type, but especially a debt bubble, can be thought of as an incipient black hole. When the bubble collapses in upon itself, it creates its own black hole with an event horizon beyond which all traditional economic modeling breaks down. Any economic theory that does not attempt to transcend the event horizon associated with excessive debt will be incapable of offering a viable solution to an economic crisis. Even worse, it is likely that any proposed solution will make the crisis more severe.

Debt (leverage) can be a very good thing when used properly. For instance, if debt is used to purchase an income-producing asset, whether a new machine tool for a factory or a bridge to increase commerce, then debt can be net-productive.

Hyman Minsky, one of the greatest economists of the last century, saw debt in three forms: hedge, speculative, and Ponzi. Roughly speaking, to Minsky, hedge financing occurred when the profits from purchased assets were used to pay back the loan, speculative finance occurred when profits from the asset simply maintained the debt service and the loan had to be rolled over, and Ponzi finance required the selling of the asset at an ever higher price in order to make a profit.

Minsky maintained that if hedge financing dominated, then the economy might well be an equilibrium-seeking, well-contained system. On the other hand, the greater the weight of speculative and Ponzi finance, the greater the likelihood that the economy would be what he called a deviation-amplifying system. Thus, Minsky’s Financial Instability Hypothesis suggests that over periods of prolonged prosperity, capitalist economies tend to move from a financial structure dominated by (stable) hedge finance to a structure that increasingly emphasizes (unstable) speculative and Ponzi finance.

Minsky proposed theories linking financial market fragility, in the normal life cycle of an economy, with speculative investment bubbles endogenous to financial markets. He claimed that in prosperous times, when corporate cash flow rises beyond what is needed to pay off debt, a speculative euphoria develops; and soon thereafter debts exceed what borrowers can pay off from their incoming revenues, which in turn produces a financial crisis. As the climax of such a speculative borrowing bubble nears, banks and other lenders tighten credit availability, even to companies that can afford loans, and the economy then contracts.

“A fundamental characteristic of our economy,” Minsky wrote in 1974, “is that the financial system swings between robustness and fragility and these swings are an integral part of the process that generates business cycles.” (Wikipedia)

But a business-cycle recession is a fundamentally different thing than the end of a Debt Supercycle, such as much of Europe is tangling with, Japan will soon face, and the US can only avoid with concerted action in the first part of the next year.

There are two contradictory forces battling in a debt black hole: expanding debt and collapsing growth. Without treading again on ground covered in many past letters, let’s take it as a given that if you either cut government spending or raise taxes you are going to reduce GDP over the short run (academic studies suggest the short run is 4-5 quarters). To argue that raising taxes or cutting spending has no immediate effect on the economy flies in the face of mathematical reality. Note that I’m not arguing for one approach or the other, just simply stating that there will be consequences, either way. The country might be better off with higher taxes and/or more spending, or the opposite. But those choices are going to have consequences in both the short and long term.

Second, there is a limit to how much money a government can borrow. That limit clearly varies from country to country, but to suggest there is no limit puts you clearly in the camp of the delusional.

The Event Horizon
The Glide Path
Speaking on Alternatives
I Was So Much Older Then, I’m Younger Than That Now

John Mauldin is the creative force behind the Millennium Wave investment theory. He is a New York Times bestselling author with a unique ability to present complex financial topics and make them understandable to the lay reader. One great example of this ability can be found in John’s “Yield Shark” investment service, which shows you how to protect and even boost your investment income…in any market. Click here to find out how.