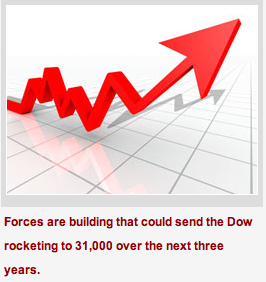 I’d like to reveal a prediction today: The Dow Jones Industrial Average will lead the way higher and catapult to 31,000 over the next three years. That’s right — the U.S. large-company benchmark will double.

Have I lost my mind? Am I a perennial stock-market bull?

No. Quite to the contrary, I’m the only analyst I know of who understands the forces that are building to send the Dow rocketing higher. And my best forecasts have always been accompanied by the shrill voices of others telling me I’m nuts.

And if I didn’t know better, I’d throw my hat in the ring with all those pundits out there who say the economy is not strong enough and interest rates are rising, so the Dow must crash.

But, I must say, I do know better. The fact of the matter is that the Dow is going to reach 31,000 over the next three years. I know better because, for 35 years, I’ve traveled the world and studied every major market and economic system. I have charted how they interact and influence one another. And I’m an avid student of the history of markets.

And the fact of the matter is this: If you understand the way capital flows like a powerful undercurrent through the world, and if you understand the significance of rising interest rates, then I promise, you will be well-positioned to make a fortune over the next few years as most U.S. stocks soar higher.

Here is what you need to know to take advantage of it:

First, rising interest rates will be one of the major reasons the Dow and other broad market indices explode higher. To the contrary of many of the best minds on — and off — Wall Street, rising interest rates are no reason to be worried about the stock market and, in fact, are the opposite: Explosive fuel that will drive stocks much, much higher.

How so? There are three chief reasons.

1. Rising interest rates are a sign that there is stronger demand for money and credit. That’s a positive. In addition, rates are now so far below the real rate of inflation, they would have to catapult to better than roughly 10 percent before they even came close to making a dent in the stock market.

2. Rising interest rates are also a sign that bond values are going to be heading down — and quite dramatically. As investors leave the bond market, they will have to put their money to work in other asset classes.

Commodities will eventually be a recipient of that capital flow out of bonds. But the biggest asset class that will experience massive capital inflows from plunging bond prices will be the stock market. It’s the only market that can handle the depth and liquidity of trillions of dollars of capital that needs to be invested.

And it won’t just be capital flowing out of U.S. sovereign bonds. There will be trillions more flowing out of European sovereign debt when the next shoe drops in Europe, and that isn’t too far off.

3. Unlike when interest rates rise solely due to a healthy growing economy, this time around rates will rise because of a crisis in confidence in government.

Sounds bad, right? After all, if governments are collapsing and rates are rising as a result, stocks must crash too, right? Wrong. Dead wrong. Which brings me to the next major reason why the Dow will explode to 31,000 over the next three years.

Second, collapsing governments in Europe and the United States will be just about the best thing that could happen for the U.S. stock market. I know what you’re thinking: That’s a pretty bold, almost unbelievable, statement. Larry has definitely lost his marbles, you might be thinking.

But mark my words: As Western governments and their largely socialist and huge entitlement programs shrink and even go bust, the private sector will become the recipient of a tsunami of cash otherwise eaten up by the public sector. And that will send stocks into an explosive move higher.

There’s more. As Western governments teeter and the banking system crashes again — and it will — stocks will be deemed to be a safe place to put your money than just about anything else. After all, just look at the Cyprus confiscation of bank depositor money earlier this year. Banks will not be bailed out in the next crisis, and depositors everywhere will be bailed in.

Why keep your money in a bank, then, when there’s no safety to be found and, instead, large amounts of your capital will be deemed to be bank creditor funds?!

Want proof of all the above? Just look at the 1932 to 1937 time period and what most analysts are not telling you about the Great Depression.

Back then, U.S. and European economies were plummeting into a depression. Unemployment continued to soar. And interest rates began to climb for the very same reasons I just cited: Primarily because 17 nations in Europe were going bankrupt, defaulting on their sovereign bonds.

And though the U.S. was the world’s creditor then, its bond markets also came under suspicion. Banks were folding left and right in Europe and the U.S.

Tens of billions of dollars fled the sovereign bond markets — and the banking system — and went directly into U.S. stock markets.

All in the middle of the worst depression in our nation’s history!

And a similar 382 percent gain from that low would put the Dow Industrials just north of 31,000.

Because unlike the 1932 to 1937 period when it was primarily the governments and banking system of Europe that were going down the drain, this time around the governments and banking system of the U.S. and Japan will also collapse, adding fuel to the fire as capital stampedes away from the public sector and from banks in droves … and into the welcoming arms of commodities and stocks.

What about the correction we’re now seeing in the stock market, and where do the commodity markets stand right now as well?

The pullback we’re seeing in the Dow was way overdue and is merely a healthy correction. It’s the pullback I have been expecting. There is no, I repeat, no risk of a crash.

The maximum downside in the Dow, according to my models, is roughly 13,623.

As for commodities, they are now in the final phase of their three-year correction. We should see final bottoms come into play in everything from gold to oil to rice by January. Then commodities will begin a moon shot higher, with gold leading the way.

Your not-so-crazy but definitely unconventional analyst,