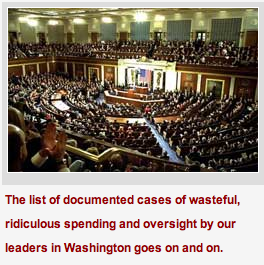 As our country heads toward another midnight fiscal brawl, let me give you some examples of how completely irresponsible our leaders are:

In 2010, the Internal Revenue Service spent $4.1 million on a lavish conference for 2,609 of its employees in Anaheim, California. Expenses included $50,000 for line dancing and “Star Trek” parody videos, and $64,000 in conference perks for employees, plus free meals, cocktails and hotel-suite upgrades.

In 2012, the Department of Agriculture spent $300,000 on activities pro­moting caviar produced in Idaho.

The Federal Communications Commission spent $2.2 billion in 2012 to provide phones to low-income Americans, up from $819 million in 2008. A review found that 41 percent of over 6 million recipients were either ineligible or failed to prove their eligibility for the program. The U.S. Secret Service spent $23 million to purchase a new fleet of luxury parade limou­sines. No competitive bids were sought.

The White House is spending $376 mil­lion on a four-year renovation of the Executive Mansion, which includes a second Oval Office for the president to use during the renovation.

The National Endowment for the Arts gave a $100,000 grant to fund development of a video game about a female superhero sent to save planet Earth from climate changes.

Medicare was recently found to have overpaid hospitals and clin­ics for a kidney dialysis drug to the tune of $800 million per year, an error that won’t be cor­rected until new rates are established in 2014.

A 2012 report from the Treasury Inspector Gen­eral for Tax Administration identified $757 mil­lion in fraudulent tax refunds to prisoners in 2010.

Due to poor oversight, over 1,000 Pennsylvania prisoners were able to collect weekly unem­ployment benefits over a four-month period, costing taxpayers $7 million.

The same report found that the SSA overpaid old-age, survivor and disability insurance benefits by $934 million in fiscal 2010 alone.

The Office of Naval Research conducted a $450,000 study to determine whether babies would pay attention to unin­telligent robots.

In a study costing $681,387, the U.S. Air Force Office of Scientific Research confirmed that men bearing firearms appear taller, stronger and manlier than those who don’t carry firearms.

The same U.S. Air Force office also conducted a $300,000 study that concluded that the first bird on Earth probably had black feathers.

And the list of documented cases of wasteful,
ridiculous spending and oversight by our leaders
in Washington goes on and on.

And now our leaders are bickering — not about how to cut wasteful spending and improve its operating efficiency, or even to really tighten Washington’s collective belt — but about which party can get the most political clout and pork barrel concessions stuffed in any bill that raises our country’s debt ceiling so we can go deeper into hock. As if $17 trillion in debt isn’t enough.

Meanwhile, these very leaders are doing everything in their power to hunt down every penny of citizens’ wealth, no matter what the cost, to find out where that money is.

The IRS is running around the globe strong-arming all foreign banks and financial institutions to disclose every American account that’s been set up offshore.

Don’t comply, the IRS says, and we’ll essentially blacklist you and withhold up to 30 percent of any income and dividends sent to your bank or institution.

As a result, Americans, such as myself, are now finding it increasingly difficult to live and work overseas.

And then there’s the spying program. The NSA knows everything you are doing online. It can determine your shopping habits and turn that information over to the IRS if it wants. It can read your emails. It can monitor you down to your daily schedule and even locate where you are at any moment in time.

Quite frankly, I am sick of it.
Our country is going to hell in a handbasket.

According to my work on war cycles, it’s going to get a whole lot worse in the months and years ahead.

As I’ve previously shown you, the war cycles ramp up all the way into 2020. They are already in motion. The turn up came in March of this year. That’s when North Korea threatened to nuke us. Then there was Egypt, the Boston Marathon bombing, and then Yemen and Syria.

There are hot spots all over the world. Some international in scope. Some are civil wars and uprisings, revolutions. Soon, the war cycles will hit Europe, where the next round will find the euro area breaking up, the euro tanking, and civil-war-like conditions breaking out all over the Continent.

And then it will hit our shores. It will get ugly, very ugly.

But there is a silver lining to all this. For our country, I think it’s this: A revolution is coming and, though we will go through some very hard times, on the other side will be a far better, smaller, more efficient government. One that does not overtax you. One that puts an end to spying on you. One that gets back to the principles of our founding fathers. And one that allows the USA to rise from the ashes of a leviathan that grew too big, too inefficient and outdated, too greedy and too power-hungry.

There’s also good news for investors who know how to play this next phase of the financial crisis, the phase that will ultimately transform us back into a great nation.

It’s actually very simple. You follow the smart money. You get out of sovereign bonds. You invest in equities that will outshine and outlast the governments of the U.S. and Europe.

You buy commodities again, aggressively, when the upcoming disinflationary trend ends. You load up on gold at this time. On silver, base metals, agriculturals and energy investments.

Most of all, you do not let the trouble in Brussels or Washington prevent you from making money. Life will go on. Commodities are still needed and, in fact, will be hoarded. Great multinational companies will thrive.

You protect your family financially, and grow your wealth.