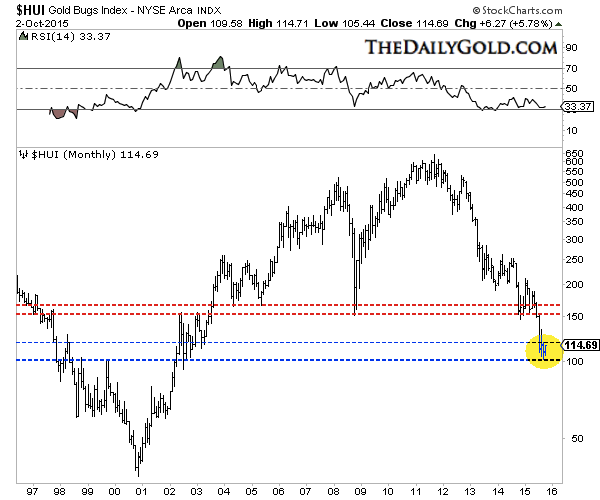 The Friday’s jobs report and the reaction by the market. The precious metals sector was threatening a breakdown and the failure of that to happen is bullish for the short term. We’ll see if this rebound is something that can last beyond this month. It could last for a few months.

Consider the monthly chart of the HUI, which closed at 115. It has been able to hold above 100 for the past few months. A monthly close above 115 or weekly close above 127 will greatly increase the likelihood of a move back to major resistance at 150. That is 30% upside from Friday’s close. Here is a daily line chart for GDXJ, which includes the 400-day moving average, a great indicator for distinguishing the trend and bull/bear markets. In TDG #433, a 33 page update sent yesterday we noted some reasons why we are very skeptical that the metals have begun a new bull market.

One is there is no evidence of liquidation or capitulation in the metals. The net speculative position is simply the longs minus the shorts. If there are more shorts than commercials are net long and speculators are net short. That hasn’t happened in Gold since 2001.

The chart below plots the net position and the shorts and longs. Note that gross long position of 52% of open interest remains well above the 2007 low and above the early 2014 low. Gold plunged in the summer to a new low yet the spec longs did not capitulate. They cut their longs but not as much as you’d expect. This same issue is even worse in Silver. Its current gross long position is 53% of open interest. The low this year was 46% with the 2013 low at 37%. So spec longs in Silver remain well above the 14-year low of 37%. In fact, spec longs in Silver are much closer to 3-year highs. Greg Weldon has also mentioned this in recent months. (Check his Twitter).

What we could see at a bottom is something like this. Spec longs plunge to new lows while spec shorts increase and make a new high. Maybe for Gold gross longs fall to 35% while gross shorts rise to 50%. The net position would be -15%. (Negative would mean the speculators are net short).

At the bottom there is dual buying power. Shorts have to cover and gross longs have a lot of room to increase because they already capitulated. This obviously does not need to take place at every market bottom but given the length and severity of the current bear market it’s more likely to happen than not.

In TDG #433 I also discussed the US$ index and the probability of another leg higher. Gold typically bottoms 3-5 months before the US$ peaks. Gold has done nothing since the US$ peaked 6+ months ago. The US$ index remains bullish technically, even if it drops in the near term. Also, if the US$ had put in a major peak in Q1 then why is Gold down since then? It’s because it was not a major peak.

We have to keep all these scenarios in our heads and assess the probabilities both for the short term (1-2 months) and beyond that (3-6 months).

Consider a subscription to our premium service as you will immediately receive all recent updates as well as recent company reports (a +50 page file) and our book, “The Coming Renewal of Gold’s Secular Bull Market”.