The Current Danger Point & Timelines in the Endless European Crisis 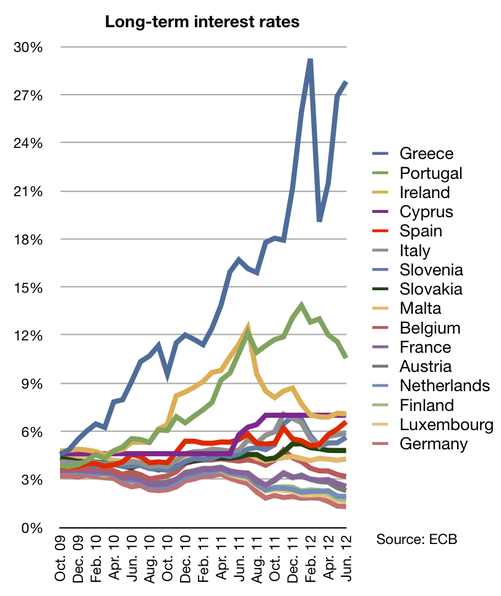 This month’s calendar has been chock a block with one important meeting or vote or conference after another.  Any one of these could have had a large impact on the endless Euro crisis.  The most impressive result (sarcasm implied) from all these meetings and votes is the overall lack of impact.   For all the wild swings in both debt and equity markets things have changed little in the past month and the European muddle through continues.

Greece has a new, pro-bailout, government with three coalition partners.  The election turned out better than feared but the real work lies ahead.   All of the parties in the election promised a much looser austerity program either through negotiation or simply by reneging on the deal.   The winning coalition promised Greeks they could have their baklava and eat it too, to a lesser extent.  Based on probably accurate leaks out of Athens the plan is to approach EU institutions looking for a two year extension to hit deficit targets.   This would require about $20 billion in additional loans above the two Greek bailout packages in place already.

This news is not going over well in Berlin.  Greeks took comments about trying to work with a pro bailout government to mean there would be some sort of completely new deal.   Not likely.  The Greek government has zero fiscal credibility, particularly since the winning party that dominates the cabinet is exactly the same one that had the biggest hand in creating the problem. Most Europeans, but particularly Germans, simply do not and will not believe Greece will stick to any deal.

German Chancellor Merkel is being vilified for being such a hardliner but she lives in a democracy and poll after poll shows German’s hate the idea of lending money that cannot be policed later.  This is the core issue for the EU and has been since its inception.   Most member governments are unwilling to give up any real fiscal sovereignty.  This means that lender states have little or no control over what happens to their funds after the cheque is cashed. It was no secret this was a big problem when the EU was being created.  Intricate rules and prohibitions were laid down that were meant to keep member countries on roughly the same plane when it came to deficit levels, etc.

Of course, these rules were broken by virtually every member state, including Germany itself.   So many EU countries breached the maximum deficit level as a percentage of GDP rules that it’s hardly surprising these rules are now viewed as mere suggestions.

This mess would always have taken years to work through.   The timeline is now longer, if anything.  That is partially due to the multi-year contraction in most of the debtor economies.  Even with harsh cuts it will take more time to balance budgets and there is no likelihood of surpluses that can reduce debt loads until debtor economies actually start growing again.

This news hasn’t gone over well with creditor nations.   An understandable reaction since a long timeline inevitably means more loans to some of the debtor nations.   Nonetheless, it’s becoming obvious that the creditors are not going to get a one way deal here.   There is going to have to be some compromise before this drama ends.  Unless creditor countries are willing to sweeten things, if only to improve sentiment in the peripheral countries, it will be hard for debtor economies to pull out of their tailspins.

Current hopes rest with the EU meeting that is currently taking place.   This is the eighteenth meeting since the crisis erupted which should tell us what the chances of success are. The most important topic is some sort of EU level bank oversight and deposit insurance.   This will take years to create but even putting together credible time line and laying out what sort of bank oversight is being worked towards will help.

As we have noted many times, the current danger point is Spain and it’s the victim of a real estate bubble, not bad governance per se.   As this issue was being finished there was news of a compromise that will help the Spanish sovereign bond market.  The EU has agreed that the latest loan package will not have preference.  This is significant since it could and should give buyers of Spanish sovereigns more comfort since it will not place 100 billion euros of debt ahead of them if something goes wrong.

Italy’s government is more guilty of pure mismanagement but it matters not; the EU does not want to see the Italian bond market go south.  It’s just too big to fix.  Many of the leading banks are also too big for their home countries to deal with.   Ireland and Iceland are the poster children for too big to fail banks (though, in retrospect, both countries probably should have let them fail anyway) but many other countries have banks that represent systemic risk, including Germany.

Bank oversight is not a bailout so much as something obvious and sensible that should have been put in place the day the Euro was created.  Promising not to demand preference for the current loan package to Spain is a huge relief to the market but the most important part of the compromise is the promise to set up an EU banking authority.

In typical EU fashion the details on the banking authority were scant and the timelines will undoubtedly be longer than the market wants but it’s a big step in the right direction.  One of the chief problems in Europe is the direct ties between bank recapitalization and sovereign debt levels.  Up to now, whenever a country that could not recapitalize its banks went to the EU the money would have to be borrowed and distributed by the government.   If this new bank authority is able to lend directly to financial institutions then every bank recapitalization will not automatically result in an equal increase it the home country’s sovereign debt level.

That is a huge change if the EU actually pulls this off. That said, this is Europe we’re talking about.  There will be lots of meetings and position papers and bureaucratic wrangling involved before the details are agreed to.  There is still room for things to go pear shaped if Germany and other creditor nations impose conditions so harsh that they cancel out the positive effects.  That possibility could cap gains but this does feel like a real shift in the political landscape.   The arrival of a large anti-austerity block headed by French President Hollande has changed the equation.

The Euro crisis is not over.  Germany and its austerity block allies have yielded on a couple of important points but don’t expect a complete about face.  There shouldn’t be one because Merrkel and her allies are right.  The only long term solution is lower debt levels and structural changes to economies that make them more flexible and responsive to changing conditions.  The former is going to take years to accomplish even under best case scenarios.  The latter may too since confronting entrenched interest groups takes more political courage than most Euro area leaders seem to possess.

Expect more turbulence in the Euro market.   Battle lines have been drawn between the pro and anti-austerity camps and there are many more fights ahead.  The debt crisis and uncertainty about how to navigate it has done enormous economic damage to the Eurozone that will take a long time to repair.  Even mighty Germany has put out recent economic readings that imply it is starting to stall.  That may well be the real reason Merkel finally showed some flexibility.  It would have been better by far if this had happened two or three years ago.

Hopefully this does not embolden the anti-austerity group to the point where they forget cost cutting and reforms are still a necessity.  French President’s Hollande’s renewed promise to lower the retirement age in France was not a positive sign.  Aside from being just plain stupid under current economic conditions it’s also exactly the kind of grandstanding that could stiffen the resolve of creditor governments and mess up further progress.

Economic readings outside of the Euro area have mainly come in better than expected.  Not great, but good enough to add some pressure to the Euro on top of its internal issues. Announcement of the compromise deal is generating one the largest one day move in the Euro this year. Gold has been trading with a very high positive correlation to the Euro so it’s getting plenty of lift too and the entire commodity complex is following suit.   This is all to the good but traders can be forgiven for remaining somewhat cautious.  When it comes to Europe this is a movie we have all seen may times before.   The devil is in the details when it comes to multi-lateral agreements.  EU rescue funds still don’t and won’t have enough money to literally rescue Italy for instance.  It’s unlikely it every will so the key will be regaining and retaining investor confidence.  The EU must get bond traders on side and keep them there.  If they can do that the world economy should be able to muddle through.

Even with that the summer doldrums won’t provide a lot of trading opportunities unless and until another company makes what looks like a major find. Volumes will climb only slowly but continued movement in the right direction politically in Europe may finally give us a set up for a meaningful fall rally in the resource sector.  Let’s all cross our virtual fingers and hope the Eurocrats don’t find yet another creative way to wrest defeat from the jaws of victory. The HRA – Journal, HRA-Dispatch and HRA- Special Delivery are independent publications produced and distributed by Stockwork Consulting Ltd, which is committed to providing timely and factual analysis of junior mining, resource, and other venture capital companies.  Companies are chosen on the basis of a speculative potential for significant upside gains resulting from asset-based expansion.  These are generally high-risk securities, and opinions contained herein are time and market sensitive.  No statement or expression of opinion, or any other matter herein, directly or indirectly, is an offer, solicitation or recommendation to buy or sell any securities mentioned.  While we believe all sources of information to be factual and reliable we in no way represent or guarantee the accuracy thereof, nor of the statements made herein.  We do not receive or request compensation in any form in order to feature companies in these publications.  We may, or may not, own securities and/or options to acquire securities of the companies mentioned herein. This document is protected by the copyright laws of Canada and the U.S. and may not be reproduced in any form for other than for personal use without the prior written consent of the publisher.  This document may be quoted, in context, provided proper credit is given.