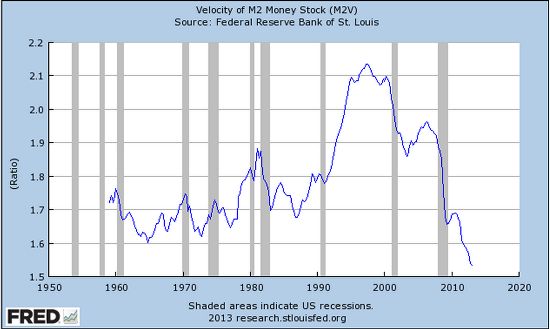 Based on both recent history and mainstream economic theory the past few years should not have been possible. When you cut interest rates to near-zero, run deficits of 10% of GDP and buy up every government bond in sight with newly created currency, you get a boom, end of story. That’s just the way capitalism works.

But this time was different. After four years of QE and ZIRP and all the other easy-money acronyms, we entered the month of May with Europe in a deepening recession and the US recovery petering out.

The culprit? The one piece of the puzzle that governments can’t control: the velocity of money. This is simply a measure of how quickly holders of currency, i.e., banks, consumers, businesses, hand their currency off to someone else. The faster and more frequent the hand-offs, the more stuff gets bought and the more robustly an economy grows. But after their 2009 near-death experience, the world’s banks have been in no mood to lend. Instead, they’ve been sticking all the new currency their governments have been giving them under the proverbial mattress. This reluctance to lend means record low money velocity and little or no economic growth. But in just the past month something fundamental has changed. US home sales and prices have accelerated, with prices returning to 2006 levels in some markets and bidding wars, flippers and interest-only mortgages once again becoming common. Stock prices pierced old records and then spiked rather than corrected. Suddenly we’re back in an asset-driven boom.