The Bubble is Back 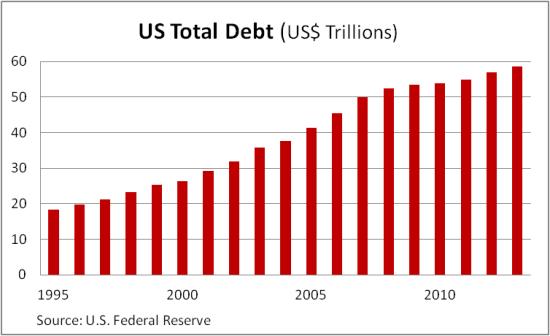 For all those analysts (including this one) who thought the debt binge of the previous decade marked end of the Age of Leverage, well, not so fast. It turns out that memories are short and government printing presses are powerful, and this combination has turned the “Great Deleveraging” into a minor speed bump on the road to something even more extreme. As the following chart illustrates, the growth in total US debt flattened in 2009 and 2010, with government borrowing more-or-less offsetting a decrease in consumer and business loans. But now the trend is once again onward and upward across the board. Prudent Bear’s Doug Noland publishes a quarterly analysis of the Fed’s Z.1 report of US credit market activity. This is always a must-read, but last Friday’s was truly extraordinary. Among other big, ominous trends, Noland notes the following:

What’s happening? The short answer is that zero interest rates have finally begun to work their magic. Corporations, for instance, are using the proceeds from low-rate bonds to buy back stock on a vast scale. See Zero Hedge’s Here’s the mystery and completely indiscriminate buyer of stocks in the First Quarter.

And now cheap credit is leading consumers to start buying cars and using plastic. Here’s an excerpt from a Financial Sense article asking how US consumer spending could be rising while incomes are not:

“One of the questions discussed was “how is this increased spending financed?”. It’s a fair question, given the painfully slow wage growth in the US.

On Friday we got our answer. US consumer credit outstanding spiked way above expectations. While the media focused on the jobs report, this was the key news item:

Unlike in previous Fed reports that showed consumer credit growth driven by student loans and to a lesser extent auto finance, we saw something new this time around. The increase was caused by a jump in revolving credit. Americans are warming up to using plastic again. This is certainly a positive signal because it shows that household confidence is improving sufficiently to send consumers shopping. Unfortunately a great deal of what Americans bought came from abroad, causing the US trade deficit to jump unexpectedly. The effect on GDP growth from this jump in consumer spending will therefore be relatively muted.

Some thoughts
It was just six years ago that soaring consumer spending, massive trade deficits and generally excessive debt caused the biggest crisis since the Great Depression, and here we are back at it. The details are slightly different but the net effect is the same: inflated asset prices, growing instability and rising risk of a systemic failure capable of pulling down pretty much the whole show.

This is sad in one sense because the people being hurt are, as always, not the architects of this latest bubble. But it’s also exasperating because the same thing happened JUST SIX YEARS AGO and should still be fresh in the memories of the adults doing the borrowing and spending. Unless all those food additives and pesticides are impairing the average person’s cognitive functioning (which is a subject for another day) the people using credit cards to buy Chinese-made junk really have no excuse.

For now, the bubble is the story, and the fact that it’s hitting its stride with stocks and bonds already at record levels is a new twist. Just about the only thing that can be said with near-certainty is that the next few years will be more volatile than the last few.