The Broad Market Outlook for 2013 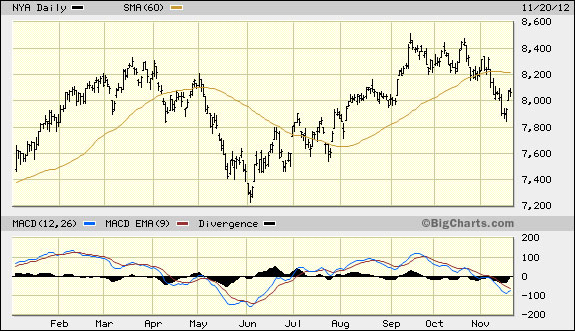 In this commentary we’ll survey the intermediate-term to longer-term market terrain and Gold Relative Strength. This is especially important since we’re about to enter a new year, which the Kress cycle outlook describes as potentially dangerous from a financial market and economic perspective.

Investors have had no shortage of worries in November, including uncertainty surrounding the presidential race earlier this month, the upcoming “fiscal cliff” on Dec. 31, troubles in the Middle East, and the ongoing euro zone debt crisis. On the European front, Spain has still not asked for the European Central Bank (ECB) to purchase its bonds, while the Euro area finance ministers will not likely to make a final decision to release the Euro 31.5 billion of aid to Greece until Nov. 26.

In a bull market investors tend to ignore worries and focus on the positive news, namely expanding corporate profits. Bull markets on average tend to run about 3-4 years before becoming exhausted. The bull market which began in March 2009 was accompanied by a major recovery in corporate profits, which was part of a feedback loop that propelled equity prices higher in the last 3+ years. Corporate profit momentum is in the process of revering now, which means investors have one less positive to consider when evaluating equities.

From an investor psychology perspective, what does it mean when fear and worry feeds on itself and creates downside momentum? It means we’re entering a bear market, which was fated to happen at some point after the 4-year cycle peaked in October. On an interim basis it was confirmed when the NYSE Composite Index (NYA) decisively broke below its 60-day moving average. Another indication that conditions have turned bearish on an intermediate-term basis is seen in the series of internal momentum indicators known as HILMO (Hi-Lo Momentum). As the name implies, HILMO is based on the rate of change in the daily 52-week highs and lows on the NYSE. Whenever all the main components of HILMO (short-, intermediate-, and longer-term) are in synch to the downside it shows that conditions have turned decisively bearish.

Of course this negative internal condition can, and most likely will, be reversed on a short-term basis. We’re entering a favorable timeframe for equities seasonally (December-January) and a year-end rally isn’t out of the question. The investor sentiment poll released last Thursday by the American Association of Individual Investors (AAII) showed the percentage of their members who are bullish were only 29 percent, while 49 percent were bearish. This net bearish reading is one of the highest in two years and suggests, from a contrarian standpoint, a short-term market bottom. But what separates a normal, healthy market from the environment we’re now entering on a longer term basis is that the rallies will likely not be sustainable beyond a few weeks. The main trend for 2013, in contrast to the past year, will likely be down. This is especially true with the final “hard down” phase of the 40-year and 60-year Kress cycles upon us in 2013 and 2014.