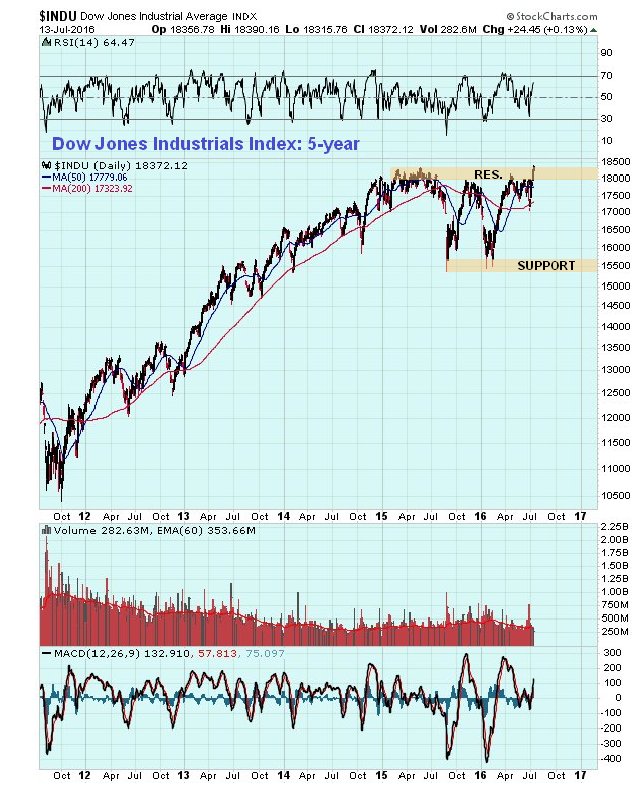 There has been a stunning post Brexit turnaround in the markets. Far from leading to chaos, the markets have taken it in their stride, and are now rising in anticipation of “helicopter money”. Helicopter money is basically unlimited global liquidity intended to head off a liquidity crunch and keep the game going as long as possible – this is the next and ultimate stage in the fiat endgame. The starting point for this is Japan, but it will quickly become global, and legal constraints can simply be brushed aside – if laws prohibit it, they can be changed. With the current global debt structure any serious liquidity problems could quickly lead to a catastrophic deflationary implosion, and that must be avoided at all costs. Helicopter money serves the best interests of the elites in various ways – they remain in power and in control for as long as possible, and can continue to use low interest rates and the carry trade etc to grow their fortunes even further, whilst the man in the street gets stuck with the bill as his standard of living and quality of life continue to deteriorate as inflation mounts and wages fail to keep up. There will be no prospect of interest rates being normalized of course – there will be a hyperinflationary firestorm before that happens.

From an investment standpoint, helicopter money creates a “rising tide lifts all boats” situation, where most investments continue to rise in price, particularly those that provide a good yield. The prospect of this massive bonanza of newly printed money on a global scale is what has caused the reversal in stockmarkets of the past couple of weeks, that has seen both the Dow Jones industrials and the S&P500 indexes break out to new highs. It has also been due to capital flight out of Europe which is beset by severe problems, which why European markets have in contrast only rallied feebly. The key point is that this rally looks like the start of a major upleg that will be fueled by a tsunami of money creation, but for it to continue the problems in the European banking sector in particular must be contained, because if European banks collapse and there is contagion, we could quickly find ourselves back in a 2008 situation. The solution is to furnish European banks with whatever liquidity they require to head off crisis, but they might not succeed in achieving that.

Turning now to the charts we see the dramatic post Brexit turnaround and breakout to new highs by both the Dow Jones Industrials and the S&P500 index on their respective 5-year charts. Here we should that new highs don’t necessarily mean that the markets are “in the clear” as there were new highs after the Bear Stearns debacle in 2007 – 2008, which ended up being followed by a crash.