The Bottom Line – Time is Running Out 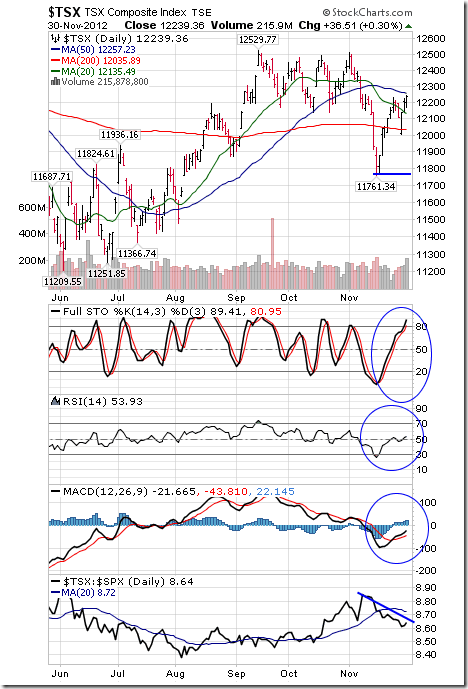 Most equity markets in the world and major sectors are recovering from oversold lows set on November 16th. Sectors with favourable seasonality are responding, but currently are slightly overbought. Preferred strategy is to accumulate favoured sectors on weakness for a recovery rally that is likely to last at least until Inauguration Day.

The earnings focus this week is on Canada’s banks. Royal Bank kicked off the period with better than expected fiscal fourth quarter results.

Economic news this week is expected to be mildly bearish for equity markets. Most data points will show weakness relative to October results mainly due to Hurricane Sandy.

Short term momentum indicators for most equity and sector indices are overbought, but have yet to show signs of peaking.

Negotiations to resolve the Fiscal Cliff will continue to have a significant impact on equity markets. Parameters for a settlement are being set. Obama’s opening gambit is to play hardball with the Republicans. A deal was almost completed in the summer of 2011 when a $800 billion revenue increase and a three for one spending cut to revenue increase was reached. Now, Obama is asking for a $1.6 trillion revenue increase, a possible $400 billion spending cut in the future and an immediate $50 billion spending increase as well as a suspension on the debate on the government deficit limit. Look for lots of stock market volatility as each party proclaims their changing position as December 31st approaches. Time is running out. Congress is scheduled to start its Christmas break at the end of next week. Chances are high that an interim agreement will be reached, but with a promise to tackle the major issues after the next Congress is installed following Inauguration in the third week in January.

The spending of large cash positions held by corporations has started. As of Friday, 173 listed companies had declared either a special dividend or an early quarterly dividend payable before the end of the year. The move is designed to reduce tax liability on dividends in anticipation of a much higher tax rate next year than the current15% rate. If dividend income becomes entirely taxable income, the rate (including the Obamacare surcharge on investment income) can go as high as 41% for investor in the top tax rate. More disturbing is the action by some companies who declared large one time dividend distributions. Instead of investing in infrastructure that will generate corporate growth, companies are choosing to avoid increasing regulation, taxation, judicial proceeding, environmental restrictions and general corporate naysaying by the Obama administration by distributing their cash. The trickle of cash spending could become a flood after terms of the Fiscal Cliff are known. Corporations do not respond well to unstable corporate environments. Anything other than a “grand plan” designed to encourage corporate growth within a clearly defined regulatory environment will not be accepted well by equity markets beyond the short term. In the short term equity prices are responding favourably to the cash distributions (e.g. Costco) and likely will continue to do so before year-end.

North American equity markets have a history of moving higher between U.S. Thanksgiving and the end of the year. Average gain per period since 1928 is 1.8%. The trade has been profitable 80% of the time. The month of December historically has been one of the strongest months of the year. Most of the gains have been recorded in the second half of the month (i.e. Santa Claus rally) after tax loss pressures have been relieved. More information on equity markets in December will be offered in tomorrow’s Tech Talk.

Sectors with positive seasonality at this time of year are outperforming the S&P 500 Index including agriculture, forest products, industrials, home builders, technology, semiconductor, biotech and Europe.

The TSX Composite Index added 26.12 points (0.21%) last week. Intermediate trend is down. Support is at 11,761.34. The Index remains above its 20 and 200 day moving averages and below its 50 day moving average. Short term momentum indicators are trending up. Stochastics already are overbought, but have yet to show signs of peaking. Strength relative to the S&P 500 Index has changed from neutral to negative. The S&P 500 Index gained 7.03 points (0.50%) last week. Intermediate trend is down. Support is at 1,343.35. The Index remains above its 20 and 200 day moving averages. Short term momentum indicators are trending up. Stochastics are overbought, but have yet to show signs of peaking. The AMEX Gold Bug Index fell 12.68 points (2.74%) last week. Intermediate trend is down. Support is at 430.69. The Index remains below its 20, 50 and 200 day moving averages. Short term momentum indicators are mixed. Strength relative to gold is negative, but showing early signs of change. Crude Oil added $0.63 (0.71%) last week. Intermediate trend is neutral. Support is at 84.05 and resistance is at 89.90. Crude remains above its 20 day moving average and moved above its 50 day moving average on Friday. Short term momentum indicators are trending up. Strength relative to the S&P 500 Index remains positive. The U.S. Dollar slipped 0.04 (0.05%) last week. Support is at 78.60 and resistance is forming at 81.46. The Dollar remains below its 20 and 200 day moving averages and above its 50 day moving average. Short term momentum indicators are trending down. Stochastics are oversold, but have yet to show signs of bottoming. ……many more charts and commentary HERE