The Bottom Line: Plan To Run For The Hills 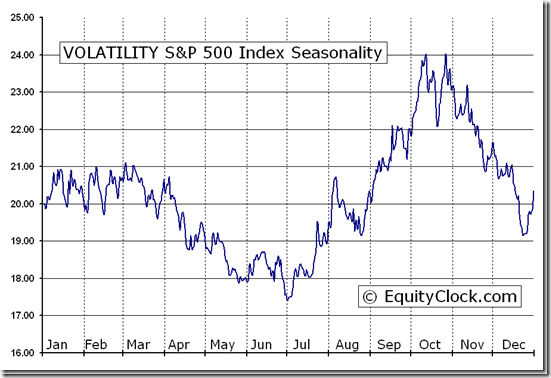 North American equity markets are in the final stages of their current period of seasonal strength. Short term technical evidence of a top has appeared, but is inconclusive. Preferred strategy is to hold seasonally strong equity positions for now, but start to plan an exit strategy to be triggered on additional technical evidence of a possible downtrend.

A key reversal by the S&P 500 Index and Dow Jones Industrial Average on Friday is a short term bearish technical signal for U.S. equity markets.

Short and intermediate technical indicators remain overbought for most equity markets and sectors.

Economic news this week is expected to be quiet. Focus is on release of the FOMC minutes for the March 19th meeting.

Political focuses this week are on election results from Quebec and Afghanistan.

Seasonal influences for U.S. equity markets and sectors normally are positive during the first half of half of April followed by underperformance in the second half of April

Historically, during U.S. Midterm election years, the S&P 500 Index and Dow Jones Industrial Average reach a significant medium term peak in the second half of April followed by a significant intermediate correction lasting until the beginning of October. Tipoff is the start of mid-term election ads. February Wholesale Inventories to be released at 8:30 AM EDT on Wednesday are expected to increase 0.5% versus a gain of 0.6% in January.

Minutes from the FOMC meeting on March 19th are released at 2:00 PM EDT on Wednesday

The S&P 500 Index gained 7.47 points (0.40%) last week despite the 1.25% drop on Friday. Note the negative key reversal on Friday when the Index also touched an all-time high. Intermediate trend remains up. The Index fell below its 20 day moving average on Friday. Short term momentum indicators are overbought and showing early signs of rolling over. The TSX Composite Index added 132.38 points (0.93%) last week. Intermediate trend remains up (Score: 1.0). The Index recovered back above its 20 day moving average (Score: 1.0). Strength relative to the S&P 500 Index remains neutral (Score: 0.5). Technical score based on the above indicators improved to 2.5 from 1.5 out of 3.0. Short term momentum indicators are overbought and showing early signs of rolling over.