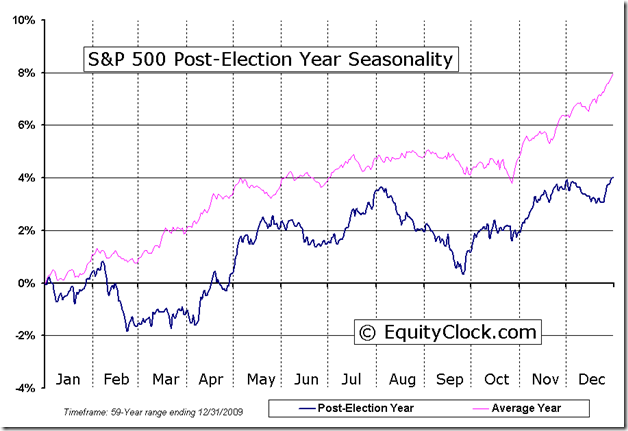 The continuing short term stock market spurt triggered by better than expected fourth quarter results has provided an opportunity to take profits on strength on a wide variety of seasonal trades (e.g. agriculture, technology, semiconductors, biotech) and to rotate into other sectors that have a history of outperformance during the January to April period (e.g. energy, platinum, copper).

Economic focus this week is on two events: the FOMC decision to be released on Wednesday and the employment report on Friday. Both are expected to have a neutral impact on equity markets.

Short and intermediate technical indicators for most equity markets and sectors are overbought, but have yet to show significant signs of peaking.

February has been the second worst performing month for U.S. equity markets during the 1950-2012 periods.

History shows that U.S. equity markets in the year after a Presidential election move higher into January in conjunction with the fourth quarter earnings report season, weaken in February and March (when tough policies are enacted) , move higher into May and close the year at a high. History is repeating in 2013.

Cash and cash equivalents continue to pile up at the corporate level, but corporations are reluctant to commit to capital expansions due to political uncertainties related to the Sequester, U.S. budget, tax reform and the debt ceiling.

From a seasonal perspective, during post-presidential election years the market has shown losses on average once earnings season concludes into the start of February.   Losses top 2% between the end of the first week of February through to the last couple of days of the month.   From there, the market typically bottoms between the end of February and into March, rebounding higher in April and May.   Given the extent to which equity markets are overbought, some sort of pullback seems likely into February once the earnings season catalyst comes to an end.   This seasonal weakness during post-election years results from the president implementing much of the tough decisions according to his campaigned-upon mandate.   With deficit reduction talks continuing over the months ahead and the two key political parties remaining firm on varying degrees of balance between revenues and spending, politics could once again influence the market according to the average tendency during equivalent years. – via EquityClock.com HERE The TSE Index has a history of positive relative performance between now and the first week in March. Gold eased $31.40 per ounce (1.97%) last week. Intermediate trend is neutral. The Index remains below its 50 day moving average and fell below its 20 and 200 day moving averages. Support is at 1,626.00. Gold fell back after an unsuccessful attempt to break above $1,700. Strength relative to the S&P 500 Index remains negative. Short term momentum indicators are rolling over from overbought levels.