The Bottom Line: Entry Point Due This Week 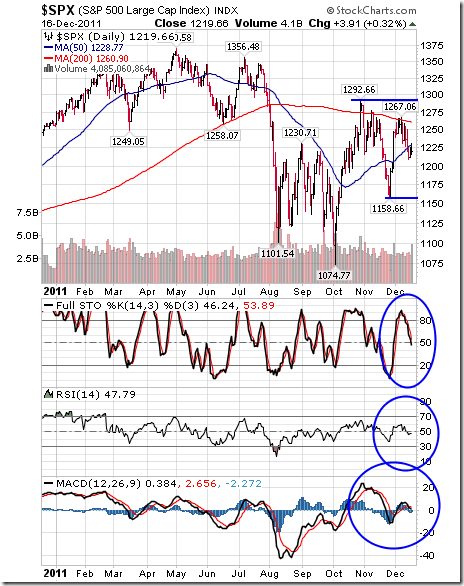 The entry point for the seasonal trade in North American equity markets (on Average during the past 61 years: October 28th) either was reached at the beginning of last week or will appear this week. Preferred strategy is to accumulate equities and Exchange Traded Funds with favourable seasonality at this time of year that already are showing technical signs of performing with or better than the market (i.e. S&P 500 for U.S. equity markets and TSX Composite for Canadian equity markets). Sectors include agriculture, forest products, transportation, industrials, steel consumer discretionary, China and Europe.

The S&P 500 Index added 4.60 points (0.32%) last week. Intermediate trend is down. The index fell below its 20 and 50 day moving averages on Friday. Short term support at 1,425.53 is being tested. Short term momentum indicators have recovered to neutral levels. The TSX Composite Index gained 213.94 points (1.75%) last week. Intermediate trend is neutral. Short term support is forming at 12,137.18 and resistance exists at 12,529.77. The Index bounced nicely from near its 50 day moving average and moved above its 20 day moving average. Short term momentum indicators are trending higher despite the decline on Friday. Strength relative to the S&P 500 Index has changed from neutral to positive. The Dow Jones Industrial Average added 15.46 points (0.12%) last week despite the fall last week. Intermediate trend is neutral. Resistance is at 13,661.87 and short term support at 13,296.43 is being tested. The Average fell below its 20 and 50 day moving averages on Friday. Short term momentum indicators have recovered to neutral levels. Strength relative to the S&P 500 Index remains neutral. ….Don has 50 more charts and so much more on his Great Monday Report HERE

The recovery is happening at an interesting time, just before the U.S. Presidential election when equity markets typically start an intermediate upside move lasting until at least Inauguration Day in the third week in January. A word of caution about individual equities! Responses to third quarter reports released yesterday were exceptional, particularly by stocks reporting after the close. Most companies are reporting slightly higher than consensus earnings. However, many are missing consensus revenue estimates. Of companies that reported before the close yesterday, State Street gained 2.0% and Johnson & Johnson improved 1.4%. However, Goldman Sachs fell 1.3% and UnitedHealth Group slipped 0.6%. Responses to reports released after the close were downright scary. CSX added 1.7%. However, IBM plunged 3.5%, Intel dropped 2.2%, Linear Technology fell 4.0%, Apollo plunged 7.6% and Intuitive Surgical gave up 4.8%. Today and tomorrow are the days when the most S&P 500 companies are reporting third quarter results. Look for lots of volatility.

About the Great Author of this Daily Report – Don Vialoux