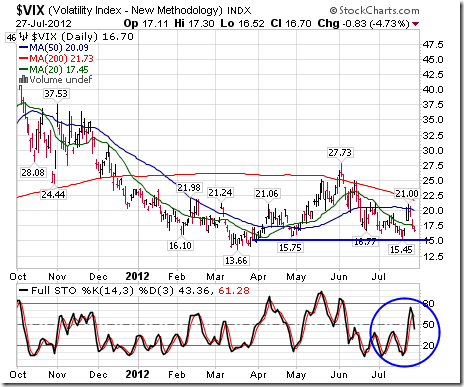 U.S. economic news released this week (other than the employment report) will be mixed at best. Most will confirm that real GDP growth in the third quarter is anemic at best. On Friday after the initial estimate of second quarter GDP was released at only a 1.5% annual rate, most economists lowered third quarter real GDP estimates. According to CNBC, average estimate based on a survey of well-known Wall Street economists was a decline of 0.1%.

The VIX Index rose 0.43 (2.64%) last week, but was heading lower on Thursday and Friday following spikes to higher levels earlier in the week. Other macro events to watch this week include Eurozone Consumer Confidence to released today, Canada’s May GDP on Tuesday, Eurozone PMI on Wednesday, China’s PMI on Wednesday and Eurozone interest rates on Thursday.

Seasonal influences on equity markets in August turn negative. According to Thackray’s 2012 Investor’s Guide, “The month of August has been the fourth worst month from 1950 to 2010” for U.S. equity markets. In addition, U.S. equity index losses during the past 10 periods were significantly higher than the previous five decades. More information will appear in tomorrow’s Tech Talk. Weakness in August is greater in the first half of August than in the second half. August frequently is the time when analysts re-evaluate their estimates following release of second quarter results. Analysts have a habit of over-estimating annual results in the first half and adjusting estimates lower after second quarter results become available. Currently analysts are estimating a 13% increase in fourth quarter earnings on a year-over-year basis. These estimates clearly are too high. Downward adjustments this year will be higher than usual.

Short and intermediate technical indicators for most equity markets and sectors are overbought, but have yet to show signs of peaking.

North American equity markets have a history of moving higher from June to December during Presidential Election years. However, at least one correction during that period also is normal.

Cash on the sidelines remains substantial and growing. However, political uncertainties (including the Fiscal Cliff) preclude major commitments by investors and corporations.

Equity markets on both sides of the border have had a good ride since their lows set on June 4th. The Dow Jones Industrial Average is up 8.6%, the S&P 500 Index has gained 9.4% and even the TSX Composite Index has improved 5.0%. Investing in equity markets has become less attractive. Accumulation of seasonal trades on weakness continues to make sense as long as the seasonal trades are outperforming the market. Sectors in this category include agriculture, energy, leisure & entertainment, software and gold. Equity markets will move higher if good news from three major events this week is released. However, upside potential relative to downside risk is significantly less now than early June. A cautious bullish stance appears appropriate.

The S&P 500 Index gained 23.31 points (1.71%) last week. Intermediate trend is down. The Index broke above short term resistance at 1380.39 on Friday to reach a 12 week high. Support is at 1,266.74. The Index returned to above its 20 day moving average on Thursday and remained above its 50 and 200 day moving averages. Short term momentum indicators are trending higher. Percent of S&P 500 stocks trading above their 50 day moving average increased last week to 75.00% from 64.60% last week. Percent is intermediate overbought, but continue to trend higher. Bullish Percent Index for S&P 500 stocks increased last week to 61.60% from 61.20% and remained above its 15 day moving average. The Index remains intermediate overbought and trending higher.

Bullish Percent Index for TSX Composite stocks increased last week to 50.00% from 48.37% and remained above its 15 day moving average. The Index continues to trend higher. Percent of TSX stocks trading above their 50 day moving average increased last week to 58.94% from 53.66%. Percent is intermediate overbought, but continues to trend higher. Percent of TSX stocks trading above their 200 day moving average increased last week to 39.43% from 38.62%. Percent is trending higher. The Dow Jones Industrial Average added 253.09 points (1.97%) last week. Intermediate trend changed from down to up on Friday when the Average broke above resistance at 12,077.57 on Friday. The Average remains above its 20, 50 and 200 day moving averages. Short term momentum indicators are trending higher. Strength relative to the S&P 500 Index is negative, but showing early signs of change. Equityclock.com is offering free access to a data base showing seasonal studies on individual stocks and sectors. The data base holds seasonality studies on over 1000 big and moderate cap securities and indices.

To login, simply go to http://www.equityclock.com/charts/

Following is an example: