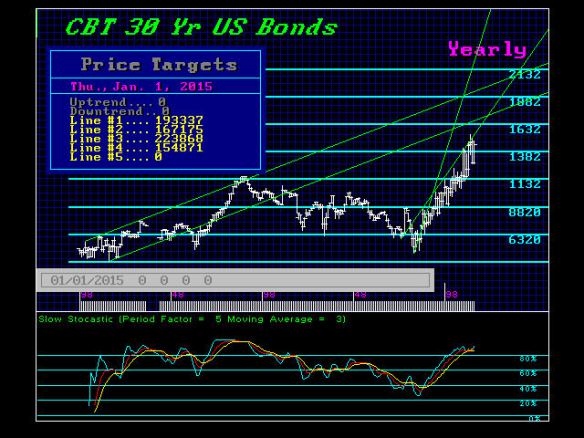 The BUBBLE for 2015,75 should be the bond market – not stocks. The capital flows should move into the typical flight to quality mode and drive rates even lower. This will set the stage for BIG BANG. To accomplish that, we should see the stock markets tread water, but not necessarily drive off the cliff. We can see the 30 year bonds from a yearly perspective we recreated back to the late 1700s not only elected THREE YEARLY BULLISH REVERSALS for the close of 2014, but the oscillator also turned up. This is reflecting the sectorial capital flow shift. Of course, the dollar haters are out in force claiming our capital flow models are wrong because the stock markets are dropping. This is typical myopic perspective that will prevent them from ever really profiting from what lies ahead. They refuse to comprehend (1) you have capital flows among nations that drives the currencies for example, and (2) you then have sector driven capital flows. It is the sector flows that we see as bubbles. To create a bubble in anything, we need capital CONCENTRATION. This is where confidence comes into play. People display their herd-instinct buy running into a sector because that is what everyone else is doing. People are convinced by price movement. These are the next three main waves until we reach the end of this 51.6 year wave with the culmination in 2032. Thereafter, China will surpass the USA and Asia will rise to the financial capital of the world. That is set in motion by the corruption in New York in place now that will deter capital in the long-run from the USA because we have no rule of law.

This 2015.75 turn should be the start of BIG BANG and this should be market with the low in interest rates that ferments the peak in the bond bubble. Each 8.6 year wave produces a bubble, yet in a different sector. It is never the same thing twice. So for those desperate to try to prove me wrong, enjoy yourself. Count you money while you still have something to play with for unless you grasp how the world functions, chances are you will ge sucked into one bubble or another, This is not about being personally right or wrong. This is trying to figure out what make the world tick.

Can The Dow Correct for up to 5 Months?

Cybersecurity – Is Anything Safe?