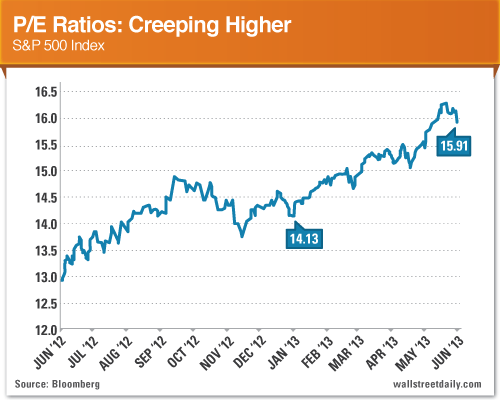 The economy keeps recovering, too. Granted, it’s sluggish. But it’s a recovery, nonetheless.

And, of course, the Fed keeps promising to backstop the whole shebang with easy money and absurdly low interest rates.

So what’s not to like about the current market backdrop?

Well, finding bargains to profit from the continued boom keeps getting harder and harder.

In fact, the valuation boogeyman is lurking around every corner.

Beware of the P/E Creep

We know that stock prices ultimately follow earnings. But prices have gotten a little ahead of themselves.

Case in point: In the first quarter, S&P 500 companies reported earnings growth of 3.3%. Yet, on average, stock prices are already up 11.5% this year.

As Garth Friesen, Co-Chief Investment Officer at III Associates, says, “The whole move we’ve had in the S&P this year has been due to multiple expansion.”

Now, Mr. Friesen might be stretching the truth a tad. But not much. Take a look: As you can tell, the “multiple expansion” accelerated in recent weeks, too.

So with screaming bargains getting harder and harder to come by, what are investors doing? The absolute worst thing possible.

Don’t Join “The Dash for Trash”

So investors are betting on the most shorted stocks, simply because their valuations might be beaten down relative to the broader market.

It’s a recipe for disaster. And Bespoke rightly labels the trend “the dash for trash.”

Whatever you do, don’t join it!

Instead, be patient and more selective. Take the time to unearth companies that trade in line with the market valuation, and benefit from accelerating sales and earnings growth rates.

Even if the current trend of a multiple expansion for the S&P 500 Index slows down or flat-lines, these companies will demand a much higher stock price in short order.

I’m about to reveal one such company to WSD Insider subscribers.

As we speak, I’m finishing up my research report on an under-the-radar and undervalued small-cap opportunity – one that could easily double in price by the end of the year.

It sells one of the hottest lines of specialty merchandise in the Southeast. And it won’t be long before the rest of the country catches on.

I plan to release the report next week. All you have to do to be included on the list is sign up here.

Bottom line: Finding bargains in the current market might require a little more work than in years past. But nobody ever said that stock picking is so easy a caveman could do it!

In all seriousness, as valuations start to get stretched and the average investor starts rotating into the stock market, now is the worst time to throw caution out the window.

Instead, we need to be more and more selective if we hope to boost our profits in the months ahead.