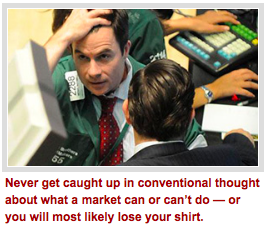 I’m often asked what I think are the most common, most ruinous mistakes that investors make. Unfortunately, there are a lot of them.

There are things such as risking too much money on a single trade or investment … not using protective stops … not using disciplined money management … trading too often … not doing your homework … taking on too big a position in any market … not diversifying enough … and so forth.

It’s having a set of preconceived notions
about what markets can and can’t do.

They are what they are and if you don’t understand a market, it’s not the market’s fault, the fault lies instead with your analysis.

I’m sure you have. I hear those kinds of phrases all the time on shows such as Bloomberg and CNBC.

Markets NEVER defy logic.
And they never defy the fundamentals.

Especially dangerous for most traders and investors is
getting caught up in the various “market myths” that are out there.

If you’re like the average investor, you’ve heard that theory literally hundreds, if not thousands, of times before. Tune into any media show today, and I’m sure you’ll hear it at least once, if not more.

Most stock brokers, and the majority of analysts and newsletter editors espouse the same causal relationship between interest rates and stock prices.

Consider the period from March 2000 to October 2002, where the Federal Funds rate declined from 5.85% to 1.75%, and the Nasdaq plunged 78%. Put simply, stocks and interest rates went down together! Exactly the opposite of what most would expect.

The fact of the matter is that the relationship between interest rates and stock prices varies considerably depending upon a host of factors, including the value of the dollar and where the economy is in terms of its economic cycles.

But the bottom line is this: Never assume anything and never, ever get caught up in conventional thought about what a market can or can’t do — or you will most likely lose your shirt.

Let’s look at another market myth. Almost everyone believes that gold and the dollar cannot go up together.

And so, they also believe that the dollar and gold can’t go down together.

In fact, in the not-too-distant future we are probably going to see another such period for gold, where it and the dollar go higher together.

Indeed, when the European Union really disintegrates, which is not that far off, that’s probably exactly what we will see: A mad rush of European money into the dollar and into gold — and out of the euro.

But history proves that to be entirely wrong, and nothing more than a myth.

Or consider the myth about corporate earnings that says they have to rise for stock prices to continue higher. Yet from 1973 to 1975, the combined earnings of the S&P 500 companies rose strongly for six consecutive quarters — and guess what? The S&P 500 Index fell more than 24%.

There are many myths or biases out there about the relationships between economic fundamentals and markets, about stocks, or between markets and other markets.

P.S. You can avoid the biggest blunders investors make with actionable information. My new Supercycle Investor podcast connects the dots between global crises, economic cycles and your investments. Listen for free and let me know what you think of the show!