The Big Disconnect: What Does it Mean?

Posted by Michael A. Berry, Ph.D. 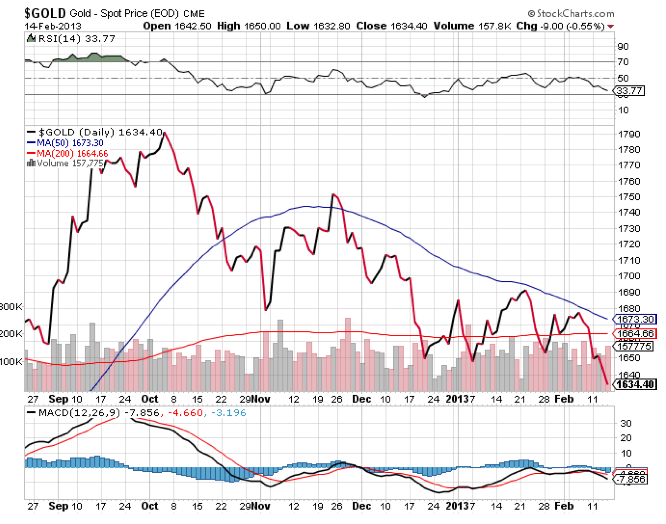 Gold is declining once again this morning. In fact gold has fallen quite dramatically from its high on October 4th of last year at $1797.70 an ounce. Gold trades, as I write, at $1608 an ounce, a decline from its October high of almost 11%.

Gold bugs everywhere are fretting and the gold haters are saying “I told you so.” As you can see, the market gods have not been kind and may have labeled gold the “barbarous relic” John Maynard Keynes dubbed (he was referring to the gold standard at the time) almost a century ago (Monetary Reform 1924).

So has gold run its course? Are we now out of the economic woods? It is interesting to note that the CRB commodity index has taken off at the same time. This would seem to imply that at least the market believes that there’s growth somewhere that will require significant commodity discovery. But it is gold and silver that have not followed suit. Hand-in-hand, the XAU index has fallen and continues to keep pace on the downside with price of gold. Its decline over the same period is almost 24%. So investors have taken gold and silver stocks, even the legacy producers, out to the woodshed and shot them. The emerging leader of the legacy gold stock universe today is Goldcorp. By all measures except share price, Goldcorp has provided investors with superior performance. In the fourth quarter alone Goldcorp produced a $504 million profit (earnings attributable to shareholders) primarily from its Canadian Red Lake and Mexican Penasquito mines. The Globe and Mail suggests this 25% increase in shareholder profits, before adjustments, positioned Goldcorp well for the coming year. We agree.

The company has now developed 67.1 million ounces of proven and probable gold resource.

During the past quarter Goldcorp produced 700,400 ounces of gold. At Penasquito alone the company produced 112,900 ounces of gold and 5.2 million ounces of silver. Costs were expected to be between $525 to $575 per gold ounce.

Operating cash flows for the year before working capital changes totaled $2.4 billion or $2.97 per share. The company increased its monthly dividend 11% to 5 cents a share. On an annual basis the dividend yield is now over 2%. Goldcorp also has reduced its risk, increased its production profile and generated significant free cash flow. Goldcorp looks to become a consolidator in the industry with its significant cash hoard.

As you can see in the following chart of Goldcorp’s share price the stock has declined 29% since its high $47.42 on September 21. It is difficult to explain this decline under the circumstances of such superior operating performance in almost all aspects of the company. The only reasonable explanation is that the market believes that the price of gold is going to fall further.

We are not in that camp. As competitive currency devaluations continue around the world and as the central bankers continue to accumulate gold and print fit currency to depress interest rates, gold and silver and other precious metals, as well as hard assets, must eventually appreciate in price.

There is of course one outstanding issue that we discussed in Wednesday’s Morning Note. It is the issue that all central bankers fear most. Could it be that markets are discounting a deflationary economic scenario in their valuation of gold? Will cash reign supreme?

It doesn’t appear likely that central bankers of the world, at this stage, will be curtailing their quantitative easing programs anytime soon with Western growth depressed. And given the recent and 3 1/2 month increase in the CRB commodity index (see graph of the CRB below) and the apparent resilience of the largely debt-free emerging world, global deflation does not seem imminent.

Therefore we believe the price of gold either has or is likely to make bottom in the near future. The leverage of the legacy gold producers will be very significant in the next year or two. For the most part the legacy gold producers issue dividends. If it is to be deflation as Gary shilling suggests then all bets are off. However the strong driver of the quality-of-life, long-term secular cycle now underway would seem to undermine a deflationary scenario in our view.

Goldcorp CEO Chuck Jeannes believes that there is simply a disconnect between the gold market, the gold indexes and the price of the shares of the gold miners. Yesterday in an interview with Toronto’s Globe and Mail he explained this disconnect,

“Relative to our peers Goldcorp is doing quite well … we are the top performer among the senior stocks … on an absolute basis we’ve seen over five years cash flow per share has gone up over 300% and our share price is up only 65% so there is a disconnect … the leverage we provide to increases in the gold price. It’s a complex situation as the gold price ran up so quickly to $1900 and people didn’t believe in it … but it’s also a fact there’s some operational issues in our sector, some political risk challenges where countries have taken assets … and there’s been a lot of cost inflation which has eaten into margins of gold producers. But I’m happy to say we were all subject to the first issue of investor’s view of the gold price. But at Goldcorp we’ve reduced our risk, maintained our costs and haven’t had any significant issues.” The plight of the juniors in the exploration space is quite different however. For the most part these companies do not have cash flows and may not have developed resources yet. It is very clear that the junior resource sector is suffering dramatically from the fear of unsustainability of operations and the difficulty of producing a discovery in the short run.

In the long run this means that all discovered and readily available commodities, but particularly gold and silver, will become less available. Pierre Lassonde, chairman of Franco- Nevada, has this made this point numerous times in the past few months.

Discovery and mine development may be a 10 year process. If this is the case within the next few years there should be significant upward price pressure on the metals in general and gold and silver specifically. The material herein is for informational purposes only and is not intended to and does not constitute the rendering of investment advice or the solicitation of an offer to buy securities. The foregoing discussion contains forward-looking statements within the meaning of the Private Securities Litigation Reform Act of 1995 (The Act). In particular when used in the preceding discussion the words “plan,” confident that, believe, scheduled, expect, or intend to, and similar conditional expressions are intended to identify forward-looking statements subject to the safe harbor created by the ACT. Such statements are subject to certain risks and uncertainties and actual results could differ materially from those expressed in any of the forward looking statements. Such risks and uncertainties include, but are not limited to future events and financial performance of the company which are inherently uncertain and actual events and / or results may differ materially. In addition we may review investments that are not registered in the U.S. We cannot attest to nor certify the correctness of any information in this note. We own shares in Goldcorp. Please consult your financial advisor and perform your own due diligence before considering any companies mentioned in this informational bulletin.