The Beat-Down in Biotech Stocks is Not Over 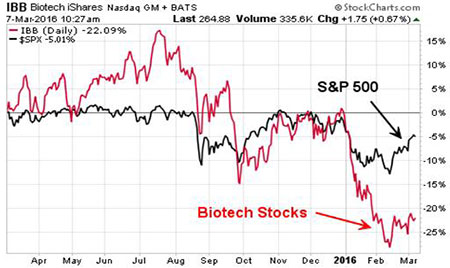 Last March, I told you to sell biotech stocks.

Following this surge, the IBB biotech ETF traded at 50 times earnings. It was also trading near 10 times book value. These valuations were close to 10-year highs.

Plus, our politicians were targeting the industry because prices for most biotech drugs surged over the past few years. I knew this would lead to tons of negative headlines as we pushed into the election year.

If you followed my lead and cashed out of your biotech stocks, you likely saved a lot of money. The IBB biotech ETF plunged 22% since my call. To compare, the S&P 500 index is only down 5% in the same time frame. Some industry professionals suggest buying biotech stocks on this dip. But my advice is to stay away. There are still plenty of headwinds that will likely push biotech stocks much lower through 2016.

The run in biotech stocks was nothing short of impressive. Some say the surge in the sector from 2012 to 2015 was based on momentum. Yet, there were also fundamental catalysts that drove most stocks in the industry to all-time highs.

For example, the U.S. Food and Drug Administration was approving new drugs at its fastest pace in nearly two decades. Once a drug receives FDA approval, the company is allowed to sell its product to consumers. That means the company will begin to generate revenue and, eventually, profits.

Plus, we saw technological breakthroughs in areas like immunotherapy, life sciences and orphan drugs (used to treat rare diseases). This led to huge investments into early stage biotech companies.

Cash was also pouring into the industry from large-cap healthcare giants. Big Pharma companies like Pfizer (PFE), Merck (MRK) and GlaxoSmithKline (GSK)were losing hundreds of billions of dollars in revenue over the past few years as the patents expired on some of their blockbuster drugs.

To stem the bleeding, they invested (through partnerships and directly) into biotechs with promising technologies. These catalysts helped push biotech stocks to all-time highs early last year.

Today, the industry is under attack.

Democratic presidential candidate Hillary Clinton recently spoke about the recent price hikes on specialty drugs. She promised to lay out a plan to help lower drug costs if elected president.

Janet Yellen also chimed in. The Fed Chair said valuations on small biotech stocks are “substantially stretched.” This followed similar comments from N.Y. Fed President William Dudley, who warned about a possible correction in the sector.

These negative comments from political figures are not expected to go away. After all, we are in an election year. And it’s much easier for our potential presidential candidates to trash the biotech industry (in an effort to gain more votes) than go on record for supporting higher drug prices for elders.

Plus, the catalysts that helped push the industry higher over the past few years are starting to wane.

For example, sales from Big Pharma companies are projected to decline sharply from past years. That could result in fewer investments into biotech companies. And the number of new biotech IPOs (initial public offerings) declined by 30% from 2014 to 2015.

Most biotech stocks, despite the recent sell-off, are also still expensive.

Sure, you could buy the best-of-breed names like Biogen (BIIB) and Amgen (AMGN)while they are trading under 20 times earnings.

But many small- and mid-cap names are trading at risky levels. This explains the massive sell-offs we’ve seen this year in names like Sarepta Therapeutics (SRPT), Alkermes (ALKS) and Celldex Therapeutics (CLDX). These companies got crushed after clinical trials fell short of expectations.

Biotech stocks are a risky sector to invest in right now. Despite the recent sell-off, most names are still not cheap. Plus, a lot of the catalysts that fueled the sector’s bull run are waning. And the negative headlines from politicians are likely to get much worse throughout the election year.

This will likely put even more pressure on biotech stocks at least over the next six months.