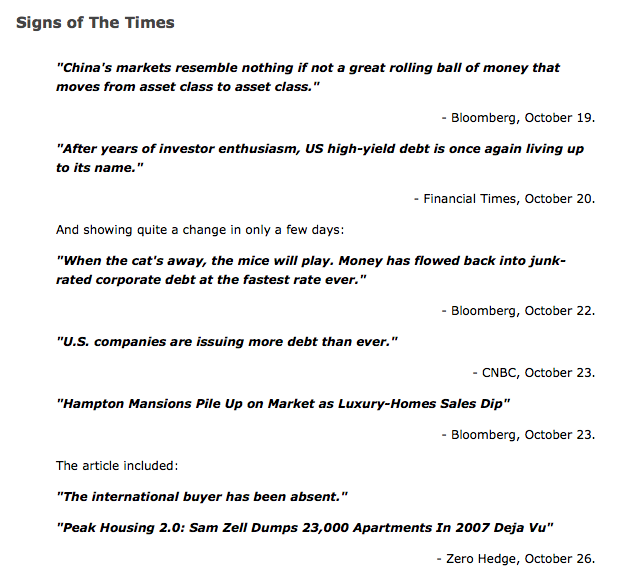 The following is part of Pivotal Events that was published for our subscribers October 28, 2015.

The top headline included a “great rolling ball of money”, as speculators dashed from one sector to another. The problem is that the hit to the SSEC amounted to a $3 trillion loss in market cap. The latest dash has been to the Chinese corporate bond market, which now appears vulnerable.

The ball of speculative money is not only fickle it is diminishing.

The irony is that policymakers still believe that central bank easing drives the economy up. The public isn’t impressed with such theories and bids up what it wants, when it wants. And then it bids them down. Usually, unintentionally.

On the latest bidding up, the ChartWorks had the DJIA reaching the Keltner Band targets at 17505 to 17870. The high has been 17712 earlier today.. This is now generating a Sequential (9) Sell set up. The last one was on May 20th.

The path to the next decline has to face two days of FMOC posturing.

Over in the financial sector, XBD (Broker-Dealers) took the hit and has accomplished a couple of dead-cat bounces. Nothing very constructive. Action in the yield curve has been non-supportive, but the correction in credit spreads has been positive.

Considering the impressive rebound in the S&P, this sector is concerning.

Resources sectors such as base metals and the oil patch have accomplished somewhat better rebounds. Slipping below the 50-Day moving averages would be unhealthy.

As noted a couple of weeks ago, massive interventions could be seasonal. So far the Bank of Japan has not made a sensational headline. Nothing bad can be allowed to happen in October.

Credits spreads widened out to 242 bps on October 2nd, the day the dreadful employment number was released. This was followed by a massive REPO operation and equally massive short squeeze.

The spread has come in to 224 bps, which is a greater correction than the one that began on August 24th.

The point to be made is that serious widening preceded two sharp hits to global financial markets.

The Treasury curve was very friendly to banks and financials from the first of the year until early July. Then unfriendly to August 20th, and then has been in a narrow range since.

As noted last week, this is trying to breakdown. At 141 now, slipping below 139 would be a negative for the financial markets.

Out of the hit that ended on October 2nd, JNK has had the best rally since things started to go wrong in June. The low was 35.10 and the high was 36.65 on Friday. This is struggling against the declining 50-Day ma and another failure seems likely.

We have been out of lower-grade stuff since the peak in June 2014.

This pattern could generate a MCD Sell.

We’ve been standing aside since the high of 128.37 on Black Monday.

• The February high in the Chinese market was very close to that salient peak in US Treasuries.
• Subsequent highs were not coordinated with swings in the US market.
• The Euro bond market followed the US peak by setting its high in April and failing.
• Treasuries are getting close to the mext significant price decline.
• Chinese bonds have rallied against the decline in the Shanghai Stock Market.
• Has the bond buying been equivalent to the frenzy in the SSEC that peaked in June?