The 88 Yr Old Legend “Something BIG could be brewing” 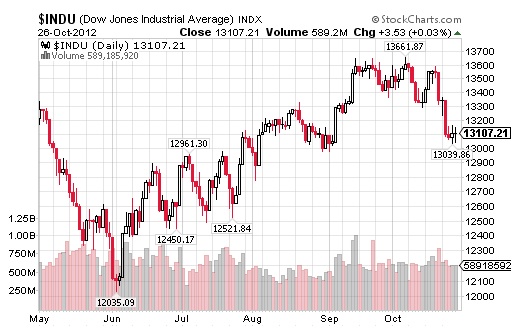 “It looks to me as though some kind of a large top has formed during late-September and October.  But the mystery (there’s always a mystery) — what could this “top” mean?  We see the breakdown to 13,039.  Ah, and here’s the fascinating part of it.  What could the market be telling us?”

Is the Frankenstorm symbolically hinting of our future? So what should we, as investors, do about it?  My oft expressed answer is that we don’t have to do anything about it.  The strategy that I have chosen is to sit on the sidelines with a portfolio clean of stocks.  Or maybe for those who have strong stomachs and an urge for excitement, limited positions in GDX and GDXJ.  The latter on the thesis that gold is acting well, despite general market weakness.

But wait — why have silver stocks been rocketing higher?  Some shrewd operators must believe that silver is about to make a big move skyward.  And if silver is going to surge, then the silver move should rub off on gold.  One ounce of gold now buys a fat 53.4 ounces of silver. And here’s Silver Wheaton, having moved nicely from around 2 to 40.  Lesson — Buy ’em when they’re dead, and when nobody wants ’em. Below is Hecla — in a symmetrical triangle, which should soon break out to the north.