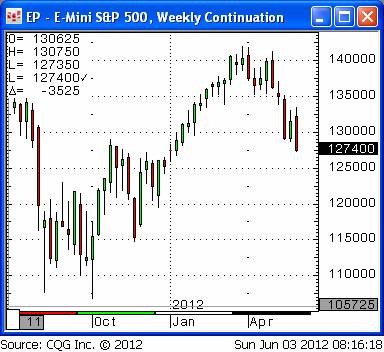 Since February I have been anticipating a significant change in market psychology that would produce lower stock and commodity prices and a rising US Dollar. I waited for confirmation and got that…in spades…the first week of May (see May 7 commentary) with a number of KEY WEEKLY REVERSALS. I continue to trade on the expectation of lower stocks, lower commodities, and a higher USD…with gold also doing better…all the while expecting that we could see a “brisk” counter-trend move across markets! – from www.VictorAdair.com

Market action the last three days and especially today was a perfect storm, or if you like, it never rains but it pours: European debt concerns intensified and evidence mounted that the global economy is slowing down. Markets behaved just as you would expect in a post credit bubble collapse…by seeking safe havens in a deflationary environment…as the consequences of “way more money has been borrowed than will ever be repaid” keep coming home to roost.

Last week I wrote about how I had “done a 180” from being a gold BEAR for the last three months (Feb to May) to being a gold BULL as I sensed a change in market psychology…I thought that gold, which had been the baby thrown out with the bathwater as “risk assets” declined, might morph from a “risk asset” into a “safe haven”… and that seemed to happen this week…especially today when gold rallied over $60 while global stocks tumbled.

Looking at markets this week it would be a gross understatement to say that money moves as Market Perceptions change. Money is physically moving from the periphery to the centre…Spanish banks have apparently lost deposits of 100 billion Euros as people pull funds out of Spanish banks and either put that money under the mattress or wire it to Germany…in another context money is leaving the “rest of the world” and going to the USA…(and Japan, oddly enough) moving from the periphery to the centre…

Charts: We had KEY WEEKLY REVERSALS this past week in the S+P and gold (and silver and platinum…) The VIX, the FEAR index, which traded to a 5 year low of 14% in mid-March, jumped to 26.6% today but it is still a long way from the 45% it hit in early October of last year…which might imply that, “You ain’t seen nothing yet” as far as fear goes. Energy: Crude oil prices have plummeted as Perceptions change about the health of the global economy…less demand for fuel…WTI was $106 May 1,2012…it traded a low of $82 today…a 23% decline. The Coal ETF traded to a three year low. Currency: the CAD has lost 6 cents from the end of April to today. The Euro fell 9% to a 2 year low in the same time frame…the US$ Index has closed higher for 5 consecutive weeks. Stocks: The major American stock indices have been among the strongest in the world but today the DJI went negative YTD. The Toronto stock index is down ~5% YTD. Commodities: the CRB commodity index has been trending lower since the KEY turn date of May 2, 2011, and has fallen ~27% since then to a 2 year low, down 12 of the last 14 weeks. My concern, as previously expressed, is that there has been a huge build up of speculative long positions in commodities (greater than before the crash in 2008) and these positions are vulnerable to a liquidation accelerated decline….bad news for the CAD and other commodity currencies. The 64 Zillion dollar questions: Will the “authorities” be spurred to action…or are they “keeping their powder dry” until things get worse before they act? Is the intensifying crisis in Europe severe enough to make the authorities try to get in front of the bank run with some kind of continent wide deposit insurance? A Eurobond? Will the Fed come in with more QE as the American employment picture worsens? It looks like the gold market, in addition to being a “safe haven” during a “risk asset” storm may be anticipating some form of “printing.”

Psychology: Very risk adverse…BUT…market Perceptions could turn on a dime if the “authorities” take action…possibly setting off a sharp rally in the Euro if some of the current massive short positions try to cover…and given the All-One-Market aspect of today’s financial markets, a sharp reversal in the Euro could set off sharp reversals in other markets…

My trading horizon view: Since February I have been anticipating a significant change in market psychology that would produce lower stock and commodity prices and a rising US Dollar. I waited for confirmation and got that…in spades…the first week of May (see May 7 commentary) with a number of KEY WEEKLY REVERSALS. I continue to trade on the expectation of lower stocks, lower commodities, and a higher USD…with gold also doing better…all the while expecting that we could see a “brisk” counter-trend move across markets!

My “Big Picture” view: remains that we are living in a deflationary world…a natural sequel to a thirty year credit boom…that the actions of the “authorities” to date have been “rear-guard” in strength, although certainly powerful enough to produce tradable rallies. I have thought that deflationary pressures would move from market to market like “rolling thunder”…hitting the USA first, then Europe with Asia next up. My net worth is nearly all in cash, 75%CAD, 25%USD, and I actively trade financial markets to make money and keep watch on developments.

Victor Adair is a Senior Vice President and Derivatives Portfolio Manager at Union Securities Ltd. Victor began trading financial markets over 40 years ago and has held a number of senior positions during his long career as a commodity and stockbroker. He provides daily market commentary on CKNW AM 980 radio Vancouver and is nationally syndicated on Mike Campbell’s weekly Moneytalks radio show.

Victor’s trading focus is primarily on the currency, precious metal, interest rate and stock index markets and his clients are high net worth individuals and corporations.