The 45-Year Record of Gold-Silver Ratios 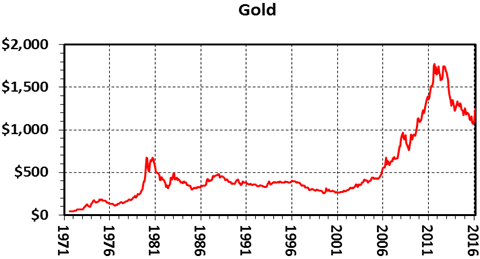 The gold to silver price ratio determines the relative value of the two precious metals and is a useful parameter in deciding which metal to buy at any given time (Mercenary Video, March 19, 2016).

In two previous musings, I first documented the history of gold, silver, and the US dollar from the establishment of a national monetary system in 1792 until abandonment of the gold standard in 1971 (Mercenary Musing, April 25, 2016); then price histories and gold-silver ratios from the United States’ abandonment of the gold standard in 1971 to present (Mercenary Musing, May 2, 2016).

In the final installment of this trilogy, let’s revisit the modern-day paradigm and focus on the distribution of gold-silver ratios over the past 45 years.

Here again are the monthly average price charts for each metal and gold-silver ratios since August 1971: Our data set covers nearly 45 years (537 months). The distribution of ratios follows in both chart and tabular format: I glean the following from the post-gold standard distribution of gold-silver ratios:

Our documentation of ratios since August 1971 debunks the propaganda that comes from hard-core silver bugs about the metal’s relative value to gold.

From a compendium of sources, the average abundance of gold in Earth’s crust is about 4 ppb while silver is about 70 ppb, for a ratio of 1:17.5. Based on these crustal abundances, silver perma-bulls promote a platform that gold-silver ratios should be less than 20.

Their argument is also based on historic gold-silver ratios from late 1792 to 1890 when there was bimetallic backing of the US dollar and/or attempts to control silver prices with coinage legislation, and a two-month period during the parabolic top of precious metals prices in early 1980.

Ergo say they, the price of silver is constantly manipulated, silver is woefully undervalued, and it is always on the verge of a major breakout.

I conclude that since August 1971 when gold was partially freed from the US dollar on world exchanges, Earth’s crustal abundances, historic fixed-price relationships, and mine production have had no influence on the gold-silver ratio.

Instead, the relative prices of gold and silver are driven by:

In my opinion, gold is the only real money, and it is my safe haven and insurance policy against financial calamity.

Although silver functions mainly as an industrial metal, it is strongly tied to the price of gold and is generally more volatile during upside and downside moves of the yellow metal. In times of financial distress and economic calamity, silver tends to behave more like a precious metal with widespread hoarding of gold trickling down. For this reason, it is often called the “poor man’s gold”.

My fundamental idea is to buy silver during instances of very high ratios and then trade most of it for gold when the ratio corrects and reverses to the other side. I suggest that a range of 40 to 50 is apropos. Note however, that mark-ups to buy or sell silver are always substantially higher than for gold and the additional cost becomes a factor in the evaluation process.

I strive to have 10-20% of my net worth in physical bullion, mostly in gold but always a portion in platinum and silver.

As a hoarder, my basic strategy for accumulating gold is to buy during downticks in its price regardless of a bull or bear market cycle. In a previous musing, I showed that there is seasonality to the gold price and that the best time to buy is from mid-June to mid-August of any given year (Mercenary Musing, January 4, 2016).

That folks, is the way I see it.

And the way I do it.