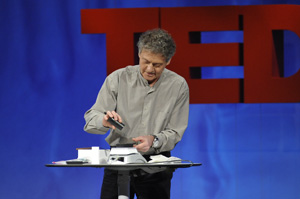 I remember watching an episode of The Jetsons as a kid and being floored by the idea that the family’s food magically appeared in front of them… no muss, no fuss — a cloud of mist that produced a piping hot meal in seconds!

For years I waited anxiously for the Food-a-Rac-a-Cycle that would conjure up a hot meal before my very eyes.

Welcome to the future, my friends.

If you’re a regular reader of these pages, you know we’ve been beating the drum on 3D printing for years now. This technology has the power to revolutionize the way we live. We’ve seen 3D printers spit out guns, human tissue, even an entire house. And now we can add a new one to the list of printable goods: meat.

Gabor Forgacs, a biological physicist and co-founder of a “in-vitro meat” start-up, actually broke out the salt and pepper during a recent demonstration and chowed down on a hunk of “biomeat” in front of a delighted audience: “Not too bad,” he remarked, as he chewed and swallowed the one-inch strip.