That’s a Lot of Silver… 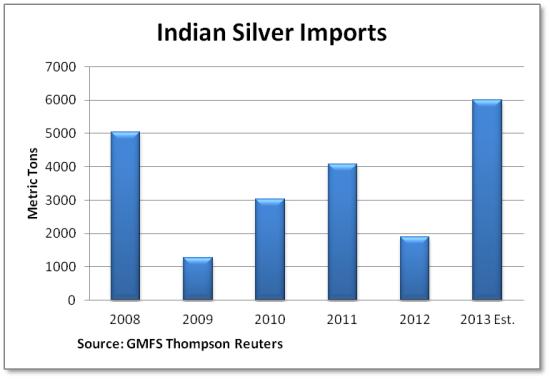 The Indian government has restricted the importation of gold. So Indians have switched to silver:

“Starved of gold, Indians may import record volumes of silver

(Reuters) – Indian silver imports are on pace to hit a record high this year as the wedding and festival season drives up buying of the precious metal instead of the traditional gold, made scarcer and dearer by official measures aimed at cutting the trade gap.

Higher silver demand in the world’s biggest buyer may help support prices, which have fallen almost 30 percent this year on the international market and are on track for their biggest annual drop in almost three decades.

The increase in buying is unlikely to spark a fresh policy response from authorities, as in the case of gold, since the value of silver that is imported is far lower than that of gold and therefore not critical to the trade balance.

“There has been a massive improvement in silver imports and we will continue to see more. Investors are taking advantage of lower prices and the lack of restrictions on silver imports as of now,” said Harmesh Arora, director with the Bombay Bullion Association.

According to the GFMS metals consultancy, India imported 4,073 tonnes of silver from January to August, more than double the 1,921 tonnes in the whole of 2012, when a jump in prices in the peak season hurt demand. The record high was 5,048 tonnes in 2008.

India, also the world’s biggest buyer of gold, has raised the import duty on bullion three times this year, taking it to 10 percent, and in July the government told importers that a fifth of their purchases would have to be turned around for export, leaving only 80 percent for domestic use.

SECOND CHOICE
The import duty on silver was also raised to 10 percent in August from 6 percent, but prices remain far apart: gold is about 60 times more expensive than silver in dollar terms.

Gold has a special place in Indian culture, bought as a hedge against inflation and traditionally used for gifts at weddings and festivals. Silver does not enjoy the same status.

The value of silver imports in 2012 was $1.8 billion, whereas gold imports cost $52 billion. Even record shipments of silver are therefore unlikely to put any strain on the trade deficit, in contrast to the impact of gold, which is India’s second-biggest import item after oil.

For now, much of the silver flooding in is finding its way to rural areas, where industry officials expect a surge in disposable incomes after a bountiful monsoon boosted agricultural harvests.

Some thoughts
Here’s a chart showing Indian silver imports since 2008. Note how they plunged in 2012, which might have had a bit to do with silver falling by over half from its $50 high. According to the Silver Institute, industrial users (including jewelry makers) absorb about 850 million ounces of silver each year, which leaves 150 million ounces for investors. But by importing 132 million more ounces this year than last, India is taking almost all of that surplus for itself, leaving the rest of the world’s silver bugs to scramble for what little is left.

Also interesting is the fact that silver is so cheap that a doubling of imports has a negligible impact on India’s balance of trade and therefore probably won’t attract the ire of regulators. So from a policy standpoint, restricting gold imports is working and will likely continue. That means the current level of silver demand might be sustained. Wonder where all the extra silver will come from?