Technically Speaking: Your Brain Is Killing Your Returns 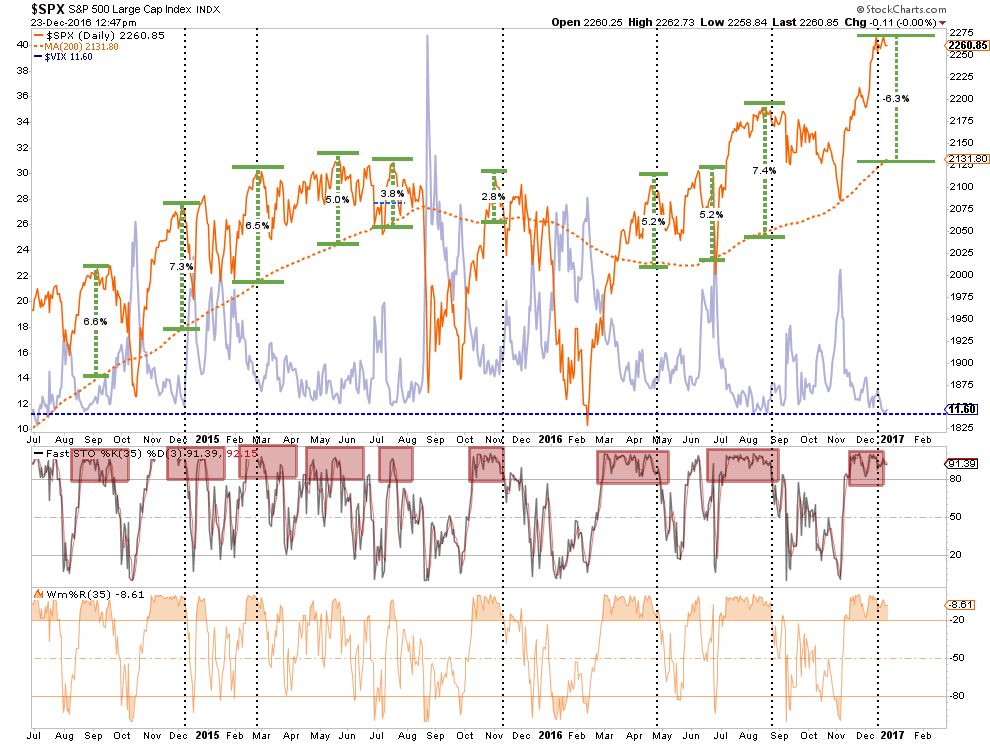 “Technically” from this past weekend’s missive. The important point, if you haven’t read it, was:

“The stampede into U.S. equity ETFs since the election has been nothing short of breathtaking,” said David Santschi, chief executive officer at TrimTabs. ‘The inflow since Election Day is equal to one and a half times the inflow of $61.5 billion in all of the last year.  One has to wonder who’s left to buy.’”

You can see this exuberance in the deviation of the S&P 500 from its long-term moving averages as compared to the collapse in the volatility index. There is simply “NO FEAR” of a correction in the markets currently which has always been a precedent for a correction in the past. The chart below is a MONTHLY chart of the S&P 500 which removes the daily price volatility to reveal some longer-term market dynamics. With the markets currently trading 3-standard deviations above their intermediate-term moving average, and with longer-term sell signals still weighing on the market, some caution is advisable. 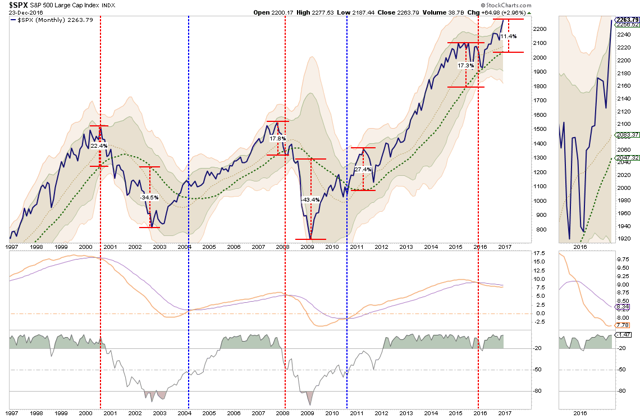 While this analysis does NOT suggest an imminent “crash,” it DOES SUGGEST a corrective action is more likely than not. The only question, as always, is timing.

However, this brings me to something I have addressed in the past but thought would be a good reminder as we head into the New Year.

“The most dangerous element to our success as investors…is ourselves.”

The Five Most Dangerous Biases

Every year Dalbar release their annual “Quantitative Analysis of Investor Behavior” study which continues to show just how poorly investors perform relative to market benchmarks over time. More importantly, they discuss many of the reasons for that underperformance which are all directly attributable to your brain. 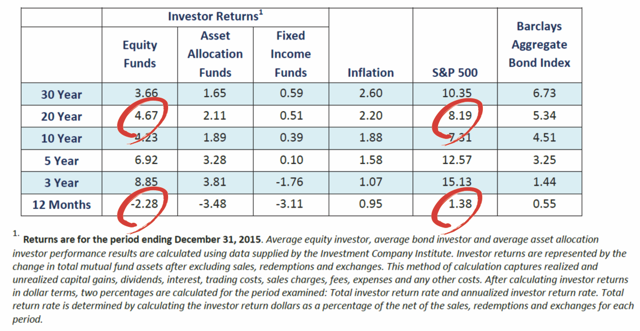 George Dvorsky once wrote that:

“The human brain is capable of 1016 processes per second, which makes it far more powerful than any computer currently in existence. But that doesn’t mean our brains don’t have major limitations. The lowly calculator can do math thousands of times better than we can, and our memories are often less than useless – plus, we’re subject to cognitive biases, those annoying glitches in our thinking that cause us to make questionable decisions and reach erroneous conclusions.“

Cognitive biases are an anathema to portfolio management as it impairs our ability to remain emotionally disconnected from our money. As history all too clearly shows, investors always do the “opposite” of what they should when it comes to investing their own money. They “buy high” as the emotion of “greed” overtakes logic and “sell low” as “fear” impairs the decision-making process.

Here are the top five of the most insidious biases which keep you from achieving your long-term investment goals.

As individuals, we tend to seek out information that conforms to our current beliefs. If one believes that the stock market is going to rise, they tend to only seek out news and information that supports that position. This confirmation bias is a primary driver of the psychological investing cycle of individuals as shown below. I discussed this just recently in why “Media Headlines Will Lead You To Ruin.” 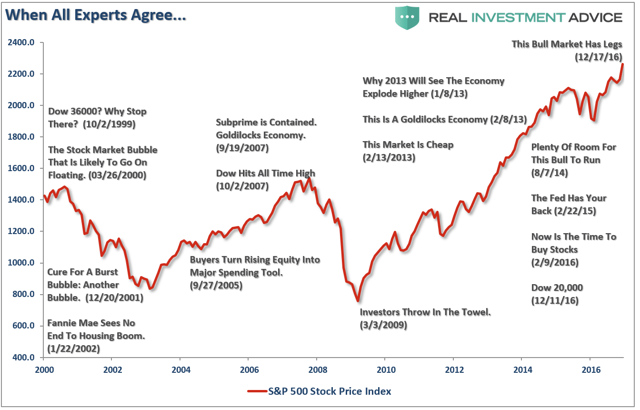 The issue of “confirmation bias” also creates a problem for the media. Since the media requires “paid advertisers” to create revenue, viewer or readership is paramount to obtaining those clients. As financial markets are rising, presenting non-confirming views of the financial markets lowers views and reads as investors seek sources to “confirm” their current beliefs.

The “Gambler’s Fallacy” is one of the biggest issues faced by individuals when investing. As emotionally driven human beings, we tend to put a tremendous amount of weight on previous events believing that future outcomes will somehow be the same.

The bias is clearly addressed at the bottom of every piece of financial literature.

“Past performance is no guarantee of future results.”

However, despite that statement being plastered everywhere in the financial universe, individuals consistently dismiss the warning and focus on past returns expecting similar results in the future.

This is one of the key issues that affect investor’s long-term returns. Performance chasing has a high propensity to fail continually causing investors to jump from one late cycle strategy to the next. This is shown in the periodic table of returns below. “Hot hands” only tend to last on average 2-3 years before going “cold.” 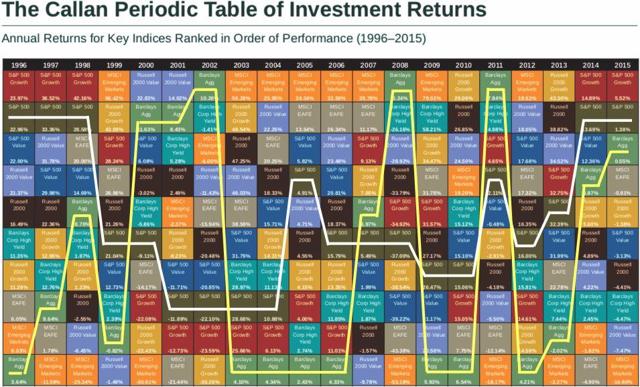 I traced out the returns of the S&P 500 and the Barclays Aggregate Bond Index for illustrative purposes. Importantly, you should notice that whatever is at the top of the list in some years tends to fall to the bottom of the list in subsequent years. “Performance chasing” is a major detraction from investor’s long-term investment returns.

Of course, it also suggests that analyzing last year’s losers, which would make you a contrarian, has often yielded higher returns in the near future. Just something to think about with “bonds” as one of the most hated asset classes currently.

When it comes to “risk taking” there are two ways to assess the potential outcome. There are “possibilities” and “probabilities.” As individuals we tend to lean toward what is possible such as playing the “lottery.” The statistical probabilities of winning the lottery are astronomical, in fact, you are more likely to die on the way to purchase the ticket than actually winning the lottery. It is the “possibility” of being fabulously wealthy that makes the lottery so successful as a “tax on poor people.”

As investors, we tend to neglect the “probabilities” of any given action which is specifically the statistical measure of “risk” undertaken with any given investment. As individuals, our bias is to “chase” stocks that have already shown the biggest increase in price as it is “possible” they could move even higher. However, the “probability” is that most of the gains are likely already built into the current move and that a corrective action will occur first.

Robert Rubin, former Secretary of the Treasury, once stated:

“As I think back over the years, I have been guided by four principles for decision making. First, the only certainty is that there is no certainty. Second, every decision, as a consequence, is a matter of weighing probabilities. Third, despite uncertainty we must decide and we must act. And lastly, we need to judge decisions not only on the results, but on how they were made.

Most people are in denial about uncertainty. They assume they’re lucky, and that the unpredictable can be reliably forecast. This keeps business brisk for palm readers, psychics, and stockbrokers, but it’s a terrible way to deal with uncertainty. If there are no absolutes, then all decisions become matters of judging the probability of different outcomes, and the costs and benefits of each. Then, on that basis, you can make a good decision.”

Probability neglect is another major component to why investors consistently “buy high and sell low.”

Though we are often unconscious of the action, humans tend to “go with the crowd.” Much of this behavior relates back to “confirmation” of our decisions but also the need for acceptance. The thought process is rooted in the belief that if “everyone else” is doing something, then if I want to be accepted I need to do it too.

In life, “conforming” to the norm is socially accepted and in many ways expected. However, in the financial markets, the “herding” behavior is what drives market excesses during advances and declines.

As Howard Marks once stated:

“Resisting – and thereby achieving success as a contrarian – isn’t easy. Things combine to make it difficult; including natural herd tendencies and the pain imposed by being out of step, since momentum invariably makes pro-cyclical actions look correct for a while. (That’s why it’s essential to remember that ‘being too far ahead of your time is indistinguishable from being wrong.’

Given the uncertain nature of the future, and thus the difficulty of being confident your position is the right one – especially as price moves against you – it’s challenging to be a lonely contrarian.“

Moving against the “herd” is where the most profits are generated by investors in the long term. The difficulty for most individuals, unfortunately, is knowing when to “bet” against the stampede.

The reason is that the purchase of the home was a major “life” event. Therefore, we attach particular significance to that event and remember it vividly. If there was a gain between the purchase and sale price of the home, it was a positive event and, therefore, we assume that the next home purchase will have a similar result. We are mentally “anchored” to that event and base our future decisions around a very limited data.

When it comes to investing we do very much the same thing. If we buy a stock and it goes up, we remember that event. Therefore, we become anchored to that stock as opposed to one that lost value. Individuals tend to “shun”stocks that lost value even if they were simply bought and sold at the wrong times due to investor error. After all, it is not “our” fault that the investment lost money; it was just a bad stock. Right?

This “anchoring” effect also contributes to performance chasing over time. If you made money with ABC stock but lost money on DEF, then you “anchor” on ABC and keep buying it as it rises. When the stock begins its inevitable “reversion,” investors remain “anchored” on past performance until the “pain of ownership” exceeds their emotional threshold. It is then that they panic “sell” and are now “anchored” to a negative experience and never buy shares of ABC again.

In the end, we are just humans. Despite the best of our intentions, it is nearly impossible for an individual to be devoid of the emotional biases that inevitably lead to poor investment decision making over time. This is why all great investors have strict investment disciplines that they follow to reduce the impact of human emotions.

As individuals, we are investing our hard earned “savings” into the Wall Street casino. Our job is to “bet” when the “odds” of winning are in our favor.Secondly, and arguably the most important, is to know when to “push away”from the table to keep our “winnings.”