Take a Ride on the Railroad… Next Stop — Profit-Town! 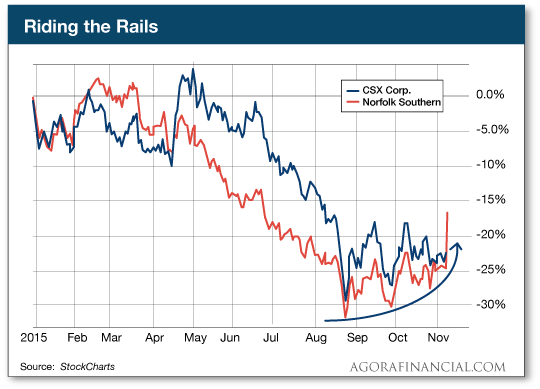 There is a sneaky industry bubbling up around oil.

The foundations of this industry were built back in the 1800s and are one reason America is the country it is today.

She’s got a lot of assets — and heck, the robber barons couldn’t keep their hands off.

If you haven’t guessed by now, I am talking about railroads.

Over the past 6 months, railroad companies have experienced a lot of downward pressure due to dropping production from the U.S. oil patch.

However, with talks of a Norfolk takeover and veto of the Keystone XL pipeline, this old time industry is putting the pedal to the metal and stocks are shooting north.

Below, Greg Guenther gives his take on the US rail industry and which company offers a way to make a pretty penny before the year is up.

2 Transportation Catalysts that Could Hand You Double-digit Gains

In a sea of red, one group of stocks is flashing green again.

And now takeover rumors in this sector are attracting a lot of investor attention. If you act now, you could quickly nab double-digit gains—no matter how the market acts over the next couple of weeks…

What stocks am I talking about? Railroads.

The catalyst? Rumors that Canadian Pacific Railway is in the early stages of taking over Norfolk Southern Corp. And let me tell you something—these railroad stocks desperately needed it. Investors have squashed the major railroad stocks to a pulp this year. Before the takeover rumors started flying, Norfolk Southern stock was down nearly 25% year-to-date.

The oil crash has been a double-edged sword for transportation stocks. While fuel costs are down, decreased activity in America’s shale basins means trains are shipping less crude across the country. But thanks to Monday’s pop and recent news, we could be seeing the beginnings of some tradeable bottoms in the rails… Norfolk Southern Corp. rallied double digits to close out the trading day. CSX Corp even spiked 3% in sympathy of the takeover news.

But aside from takeover chatter, even the news cycle is turning back in favor of the ailing rail stocks. You probably heard that the Obama administration finally deep-sixed the Keystone XL Pipeline after seven years of nonsensical review. But hey, screw pipelines! We toss our crude onto trains that may or may not occasionally derail in a fiery disaster.

Either way, the focus is back on the trains. Before all this nonsense was set in motion over the weekend, Forbes reminds us that the “big 4” U.S. railroad stocks– CSX, Kansas City Southern, Union Pacific, and Norfolk Southern – were all down at least 25% on the year.

“But there’s a reason Warren Buffett and Berkshire Hathaway bought Burlington Northern a few years back. Railroads are durable businesses,” Paul Karos, senior portfolio manager at Minneapolis’ $4 billion Whitebox Advisors, told Forbes. “Barriers to entry are high, margins are expanding and the group should benefit if the U.S. stays out of recession.”

During the first half of the year, transportation stocks couldn’t catch a bid. While the Dow Jones Industrial Average chopped along near breakeven, its cousins over at the Dow Jones Transportation Average piled up double-digit losses by early July. Now’s your chance to play a snapback rally in the transports as all of this train news comes to a head…

Check out CSX Corp. (NYSE:CSX). After trending lower for months, CSX is beginning to attract strong buying on almost every dip: Monday’s 3% move higher on strong volume should help snap this stock out of its malaise. And it offers you the perfect chance to hop on and ride the rails to double-digit gains before the year is up.

So be sure to hop on this gravy train today.