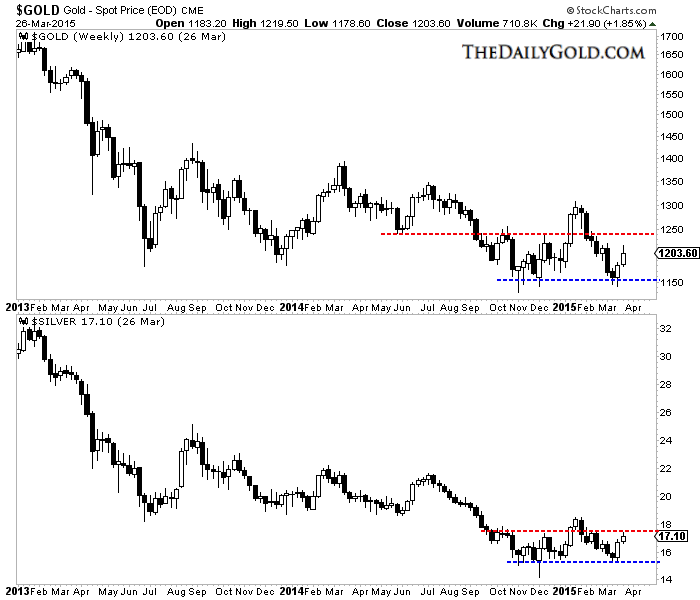 The precious metals complex has established a floor of support over the past five months. For Gold it is around $1150/oz and for Silver it is around $15.50/oz. Pick any miner index and you’ll see the support at the November and December lows. These lows could mark a base of support from which a new bull market takes hold. On the other hand, they could also mark support that if broken could lead to a final but nasty capitulation.

Below is a weekly candle chart of Gold and Silver. Support for Gold is now well defined around $1150. There is major resistance at $1220-$1240 as well as $1300. Meanwhile, Silver has support around $15.50 with resistance at $17.50 to $18.50. If the metals can takeout their January highs then they would definitely be in a new bull market. Conversely, if metals takeout their March lows to the downside, then it could mark the final breakdown of the bear market. The miners are now showing relative weakness as they are down for the week while the metals are up. The HUI closed the week at 166. It failed to reach first resistance at 180, though it still could. The HUI has a confluence of strong resistance just above 200 with strong weekly support around 155. A weekly close below 155 could trigger a final breakdown while a surge above 200 would signal a new bull market. I do see some fundamental positives for precious metals. Real rates and real yields may be headed lower in the future. Yields are declining and Fed hikes could be put off again. Inflation, ex energy seems to be slowly ticking up. Meanwhile, problems in Greece could boost Gold even in US$ terms. Any trouble in US equities could certainly be a catalyst for precious metals.

This being said, we need to respect the charts which can be considered bearish until precious metals take out higher levels or until they breakdown and become extremely oversold. I’m leaning to the latter scenario. Protect yourself and your portfolio so you can benefit from a final breakdown. In that scenario, technical indicators and sentiment indicators would reach major extremes as diehard bulls are forced to capitulate. Those are the conditions for great buying opportunities that can lead to a bear market bottom. Consider learning more about our premium service including our current favorite junior miners which we expect to outperform in the second half of 2015.