‘SUPER CYCLE’ IN COMMODITIES IS NOT DEAD — JUST THE OPPOSITE 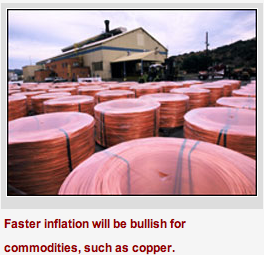 I want to give you an update on the commodity sector today. That way you will see the big picture as I do.

Most are saying the commodity super cycle — a rise in demand and prices — is over, that commodities are headed down for years to come. Not just gold, silver or other commodities like copper and foods, but the entire commodity complex is now going into hibernation.

The fact of the matter is nothing could be further from the truth. Not only are precious metals now in the timeframe for a major bottom — and the beginning of their next leg up — so are most other commodities.

The reasons are simple:

First, my war cycles and the turmoil the world is headed toward, especially Western governments and societies. Historically when the war cycles are ramping up — as they are now — commodities do well. Investors seek hard tangible assets, others scramble to secure as much supply as possible, and regional natural-resource wars break out. All of that is bullish for commodities.

Second, the crashing monetary system. As I’ve been telling you now for quite some time, the U.S. dollar will lose its reserve status. By 2016. As the monetary system crashes along with the dollar and a new monetary system is born, the uncertainty and volatility that will be seen during the evolutionary process will be very bullish for most commodities.

Third, inflation. Inflation will inevitably rise as well. And though I am not in the hyperinflation camp, faster inflation will be bullish for commodities. Fourth, the dismal state of supplies. The interim bear market of the past three years has crimped supplies in almost every commodity. Producers, not just miners, have had to shut down operations all over the world. Many have gone out of business, in every commodity. Miners, food producers, oil and gas exploration companies, and more have been shuttered by the dozens.

The big commodity firms that remain will not be able to pick up the slack or increase production all that much even as prices rise in the future. That means shrinking supplies, which is, of course, bullish for commodities.

Fifth, the ongoing rise of China and southeast Asia. Three billion of the world’s 7 billion people live in Asia. More than 40 percent of the world’s population. Anyone who thinks that their newly awakened souls are going to stop desiring better lives for themselves, their children and grandchildren, must be smoking something.

Asian demand is here now and it will accelerate higher in the months and years ahead. And Asian demand will remain a very strong force driving commodity prices higher in the future, even if the Western economies of Europe and the United States go down the toilet.

So what about commodity prices right now? Why are they mostly weak and falling? Oil is trading below $100. Grain prices are slipping and sliding. Base metal prices are weak. What gives?

Like gold and silver, we are in the tail end of disinflation. There will likely be further declines in the immediate future. Some will even be steep and startling, like oil, where I expect the price of crude to fall to near $60 before the energy market bottoms.

But the tail end of disinflation is what it is: a bottoming process. There’s still money to be made on the bearish side of commodities. But the really big money will be made getting in on the long side soon, in just about every commodity under the sun.

The thing is, unfortunately, most investors won’t profit from the next big move up in commodities. They will see the price declines of the next few weeks and call it a day — just when commodities are about to turn up again.

I’m here to tell you again that nothing could be further from the truth. Instead …

A stronger dollar will also be bullish for commodities. Exactly the opposite of what most believe is possible.

As I’ve told you previously, a stronger dollar means that Europe is going down the tubes. As Europe cracks at the seams, hundreds of billions of dollars will find its way back into commodity hedges.

Those savvy investors know that a rise in the value of the dollar at this point in the big macro-economic cycles also means that Washington is having trouble paying its bills, that Washington is about to collapse and that to preserve capital, alternative assets must be sought out. Not just cash but also tangible assets: commodities.

We are entering a period not seen since the middle of the Great Depression, between 1932 and 1937. It’s a period when what was once safe, becomes risky, and what was once risky, becomes safe. A period when the old rules of investing and trading are turned upside down, and inside out.

Keep that in the front of your mind, and not only will you survive it, but you will also become one of those savvy investors who thrives.