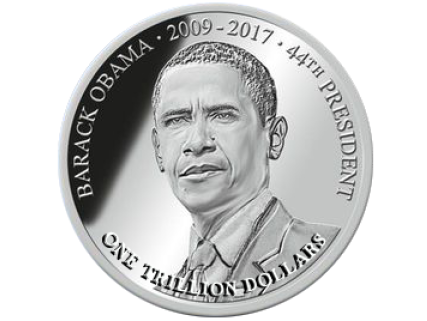 The talk circulating that the U.S. Treasury can circumvent the debt ceiling by minting a trillion-dollar platinum coin is pure nonsense.

First, to the best of my knowledge, the U.S. Treasury does not own any platinum. That means it would have to go into the market and buy up platinum to mint such a coin.

But the Treasury is broke, so where would the money come from to buy the platinum?

The Federal Reserve, presumably. But I doubt the Fed is going to print another trillion dollars in one fell swoop to let the Treasury go buy 625.8 million ounces of platinum.

And even if the Treasury could come up with the money via the Fed, where would that much platinum come from?

The total global above-ground supplies of platinum are estimated to be roughly 7.5 million ounces, and the total annual production is about the same.

That means there would be about 15 million ounces of platinum available, assuming the Treasury could purchase 100% of available above-ground supplies and 100% of the production for 2013.

Utterly and ridiculously unrealistic, to say the least.

OK, so let’s say that $1 trillion coin has “seigniorage” in it. Its value — because it’s sovereign money — is worth more than the platinum in the coin.

And let’s say the government’s profit on the difference between the value and the cost to produce it is as high as 50% and only half the amount of platinum I just mentioned is required.

You’re still looking at 312 million ounces of platinum that would be needed. Still an utterly impossible feat to accomplish.

And then there’s another problem …

Who, or what country — in their right mind — would buy a platinum coin or coins from the U.S. Treasury knowing full well the metal is not worth a trillion dollars and that the Treasury has a large seigniorage markup on it?!

Let’s try another angle: Let’s say Washington dumps some of its gold reserves or borrows against them to buy platinum. Would that work?

Hardly. Washington owns some 287 million ounces of gold, worth roughly $474 billion. In other words, Washington would have to dump or hock our entire gold reserves.

Not going to happen.

Second, even if any of the above were logistically possible, what would it say about the U.S. and the U.S. dollar?

Minting a trillion-dollar platinum coin or even 657 million one-ounce platinum coins to pay our current debt, with more borrowed or printed money, would just send the signal that Washington is so desperate that it’s resorting to loony acts of desperation.

The dollar would plummet in value, and our government’s credibility would be toast. So would the dollar’s.

Even the platinum market doesn’t buy the idea of a trillion-dollar platinum coin. If it did, the price of platinum would be soaring, and it’s not.

Will all this nonsense lead to something else, like more talk of going back to a gold standard?

For sure, you’re going to hear a lot more about that in the months and years ahead.

Let me make something else perfectly clear:

In the months and years ahead you’re going to hear all sorts of nonsense, rumors and rhetoric about gold, about silver, about precious metals. 99% of it will be just that, nonsense.

Yes, gold is headed much higher over the longer term. So is silver, and so is platinum.

But the next leg up in the metals is not yet here and when it does come (from still-lower prices) it will not be due to any of the above nonsense.

Short of all the governments of the world getting together … canceling all debts … and designing a new, debt-free-based monetary system.

It’s going to happen. The problem is that the world is going to have to go through hell to get to the other side.

Chief reason: We have leaders in Washington (and to be fair, other governments, like Europe) … and economists and analysts who are absolutely harebrained.

We passed though the eye of the hurricane last year …

And this year, the back wall of the greatest financial hurricane of all time will start to hit.