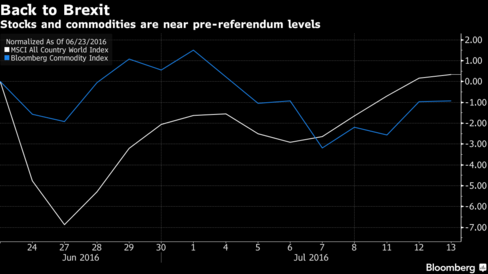 Equity markets globally have rebounded to their pre-Brexit levels and volatility in financial markets is the lowest that it has been for a month. Even the precious metals rally has taken a breather. Are the markets suggesting that the fallout from Brexit is less than previously thought and that the systemic risk posed by the UK leaving the EU is contained? The emergence of Theresa May as the new Prime Minister of Great Britain has at least given a degree of certainty in what was looking like a political vacuum but is this enough to ease the nerves of the financial markets. In the short term, at least it would appear so.

Unexpectedly, calm is returning to global markets on speculation central bank action will be sufficient to restrict any Brexit contagion. Economists predict the Bank of England will cut interest rates Thursday, while Japanese Prime Minister Shinzo Abe has ordered more fiscal stimulus. Traders are pricing in less than 35 percent odds of the Federal Reserve raising rates this year.

Today, Bloomberg takes a look at what one Fund Manager has described; ““the strangest environment I’ve seen in 30 years”

The full report can be read HERE