Stocks: “On The Threshold of Oversold” 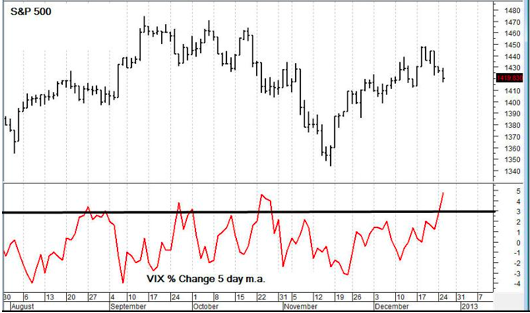 Again, fiscal cliff concerns, but also disappointing Christmas sales weighed on the equity markets. Not even strength in Asia could keep a fourth down day out of the last 5.

Be aware that with the stock market getting on the threshold of an oversold condition, a deal on the fiscal cliff, even a lousy one could cause a knee jerk rally so we’ll stay on the alert.

An example of this oversold condition is the percentage VIX change 5 day moving average. Readings above 3.0 frequently portend a rebound. Today it closed at 4.8.] TORONTO EXCHANGE:  Toronto was closed for the Boxing day holiday.

THE REST: The dollar was slightly lower. Gold, silver, copper and crude oil were all up.

System 2 traders We are in cash. Stay there on Thursday.

System 7 traders We are in cash. Stay there on Thursday.

We’re on a sell for the dollar and a buy for the euro as of November 19.

We’re on a sell for silver as of December 19.

We’re on a buy for crude oil as of November 19.

We’re moving back to a buy for copper as of today December 26.

We’re on a buy for the Toronto Stock Exchange TSX as of November 21.