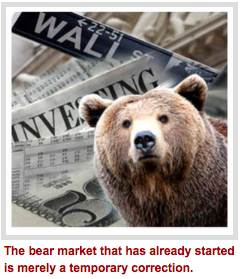 They are now in a severe bear trend, one that will look at times like the end of the world is upon us.

You will hear all the die-hard bears come out of the woods. Dow 5,000 they will scream, or even lower. Another real estate crash. Plunging asset values. An emerging market crisis. Bank failures. Systemic crashes. And more.

But mark my words, the bear market that has already started in equities is merely a temporary correction, one that will set the stage for the Dow Industrials to launch much higher, to over 31,000 in the years ahead. I have been warning that there would be a sharp, sudden pullback in the stock markets before the next real bull market begins. And yes, it took some time for it to arrive; more time than I had expected.

But it’s here. It started on the first trading day of the new year. It’s going to be ugly at times. And it’s going to end in late March/April or worst case, May — with almost everyone throwing in the towel on stocks, which of course, will be your sign to start backing up the truck, big time.

So that you know exactly what is going on and can be fully prepared for what’s coming, let me explain a few things:

First, stocks are not overvalued. Contrary to what most pundits are claiming, stocks are NOT overvalued — when measured in real terms, in what I call “honest money terms” — in terms of the price of gold.

In fact, for the Dow to catch up with the changes we have seen in the value of money (in terms of gold) over the last 15 years alone, it would have to rally to a minimum of 26,570. That alone proves that stocks are not overvalued.

Second, rising interest rates are not the problem either. I’ve explained this before and I’ll mention it again: Stocks are not falling because of Yellen’s rate hike or fears of further hikes.

In fact, throughout history, most major bull markets in equities, and commodities for that matter, occur when interest rates are rising!

Third, technically and cyclically, a pullback is perfectly normal and must occur before the markets can head any higher.

For ANY market to move up into new territory, to uncharted waters, it must further gather the strength to do so. That inevitably means a pullback to gather and renew the market’s strength, so to speak, to break through to new highs.

Think of it this way: Suppose a loved one is behind a jammed door and there is a fire in the house. You pit your shoulder against the door to break it down. It creaks. You bounce off it.

You try again. It cracks a tad. So you back up, gather your strength, and them make a third final strike at the door. It busts open and you tear through to the other side, rescuing your loved one.

It’s exactly the same principle in the markets. For any market to move to a new record high and start a new bull leg higher, it must first pullback.

Sometimes, it may take a shallow pullback and only one run at the door to break through to new highs.

Sometimes it may take several pullbacks, or one long deep pullback.

Either way, the point is the same and it is how markets move.

So how long might this bear market last? As noted above, timing-wise it should be over by late May, worst case.

If you’re not already out of the majority of your equity holdings, as I have warned for months now — with the exception of those recommended in one of my services …

Then get out. For those you cannot exit, for whatever reason, then consider hedging with an inverse ETF on the Dow or S&P 500. There are many choices out there.

And build your firing power, your liquid cash …

So you can be ready to pounce all over stocks as soon as this temporary bear market ends. For when it ends, the Dow’s next big move will be to vault to 21,000 … then 25,000 … and then even higher.

And it will do so right along with new bull markets in commodities, some of which are already starting!