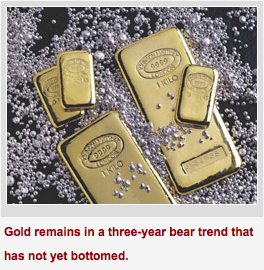 I’ve received so much great feedback from my Feb. 17 question-and-answer column, I’ve decided to do another Q&A issue today.

The mere fact that I’m getting so many mailbag questions in and of itself tells us all that something is brewing out there, big time!

So with that in mind, let’s get started.

Q: The S&P 500 has hit new highs and so has the Nasdaq. So what’s happened to the stock selloff you warned about?

A: Yes, those two indices have hit new record highs, a long-term confirming signal for the long-term bullishness in the equity market. But neither the Dow Industrials nor the Dow Transports have hit new highs, which is a bearish development in the shorter-term.

Keep in mind that unlike important market bottoms, important market tops take time to develop. I suspect there might even be another attempt at new highs in the Industrials before the markets really top out. Cycles point firmly lower heading into the summer. Per my warnings, you should already be out of stocks and speculators should consider the short side with futures or inverse ETFs. I repeat the important support levels to watch going forward:

Q: Larry, you have been right as rain on your forecast for increasing geo-political conflict. Since you put that forecast out just over a year ago, we’ve seen Egypt blow up, Libya, Yemen, Turkey, Argentina, Venezuela, Thailand and, of course, the latest and most violent, the Ukraine.

A: Yes, it is truly amazing. And we are still at the very beginning of the ramp up in the war cycles. It’s going to get worse, much worse, and it will eventually hit the streets of Europe (again, but in a much more violent fashion) and in the United States.

I was recently invited to speak on the war cycles at the Army and Navy Club in Washington D.C. Not sure if I can make it, but it seems like everyone is now interested in what the war cycles are predicting.

I find the developments in the Ukraine particularly interesting. The Ukraine is a hot-bed for Russian/U.S. and European relations. On the one hand, Putin wants to rebuild the former Soviet Empire’s vast strength and reach, and on the other hand, Europe is trying to hold together the European Union and single currency, while the U.S. of course sides with Europe in the matter.

Could we be on the verge of another cold war? Absolutely. Could the Ukraine end up causing military conflict? Yes, it could.

But at its root, the problem in the Ukraine is due to two forces. One, the corrupt government, and two, the fact that the country was already split along the fault lines of language, with half the country speaking Russian and the other half, Ukraine.

Keep in mind that the war cycles rise all the way to 2020. So, yes, it’s going to get a whole lot worse, and once commodities bottom, the cycles of war will become the number one force that will drive them higher.

Q: Bitcoin is dying, just like you said it would. Is there a way to short it?

A: There is a bitcoin exchange in Hong Kong — the ICBIT derivatives market — but I would not short the currency. With what happened to Mt. Gox recently, where $300 million has gone missing, who knows what your counterparty risk is if you’re short bitcoins on a winning trade. You may never get paid.

I would not buy, sell or trade bitcoins — or any other digital currency, for that matter.

Q: Gold’s rally seems to be fading, no?

A: Yes, it seems to be. There is very tough overhead resistance scaled in from $1,360 to $1,400. A test of $1,360 remains possible but it’s becoming more and more doubtful. Gold remains in a three-year bear trend that has not yet bottomed. Ditto for silver and for mining shares as well.

Q: Grains have had a strong rally. Is their bear market over?

A:The polar freeze interrupted the trend in the grain markets, but it did NOT change it. The trend remains negative and the lows for the agricultural sector have not yet been seen.

Q: When will inflation come back?

A: Not for a while, so don’t listen to all those out there preaching hyperinflation. It’s not going to happen.

The chief reason: The governments of Europe and the United States are engaging in fiscal policies that are sending money into hiding. Raising taxes, confiscatory measures, tracking everything you do, and more. It’s all part of the rise in the cycles of war.

Q: What do you think of Facebook paying $19 billion for WhatsApp?

A: I think it is utterly insane. I think Facebook’s valuation is equally insane.

I believe Facebook is topping as I pen this column and I would not be surprised to see it lose more than half its value over the next few months.

A: Absolutely not. To get to $50,000 gold, the world would have to go back to the dark ages. That is not likely to happen unless the powers-that-be are stupid enough to try and back the world’s monetary system with gold.

Ironically, that would be exceptionally deflationary, and cause a massive global depression that would make the 1930s depression look like a walk in the park.

And there isn’t one single government on the planet that would want to back its money with gold, China included.