Stock Trading based on Mainstream Media Perfect recipe for Losses 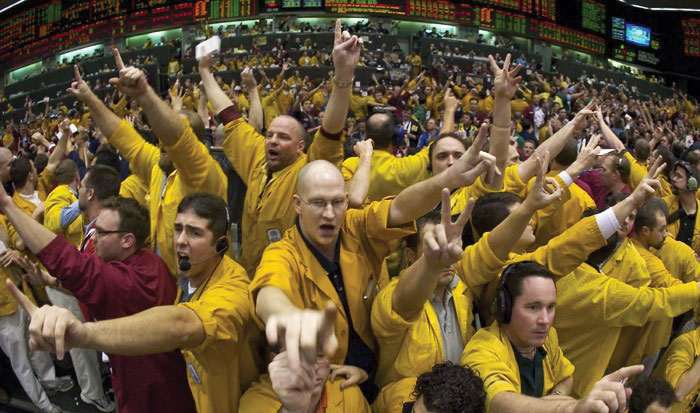 If CNN, FOX, CNBC, etc. are the primary sources you use to base your investment decisions on, perhaps it is time for a change in strategy. These outlets focus on amplifying the “noise factor”. Their only function is to make sure that the crowd will over react to any given event.

There is too much information out there already and 90% or more of it is garbage.  Conceivably,  this is why experts who have been focussing on the fundamentals cannot understand why this market continues to surge higher. Fundamental data is provided in a standard format, so everyone that has access to it draws the same conclusion.  Now, with EPS and other statistics being manipulated, the little value that fundamentals once offered is entirely negated.  Perhaps, this also explains why so hedge funds are performing so poorly; in fact, except for a few standouts, investors lost and management was the only one that was getting rich, but that is a story for another day.

Hedge fund titans once ran their firms like elite private clubs, picking who made it past the velvet rope and how much they would pay for access to supercharged performance. Years of poor performance have now led a number of funds to consider something more like general admission.

“I see the herd mentality among hedge funds every day,” Roslyn Zhang, a managing director at China Investment Corporation, China’s sovereign wealth fund, said at the SkyBridge Alternatives, or SALT, hedge fund conference in Las Vegas last month. Describing how some funds spend “two seconds” on one theme before deciding to put investor money behind the idea, she added: “We pay 2 and 20 for treatment like this. I am reflecting that maybe we are not making the right decision. Full Story

Doug Dillard followed the path that once almost guaranteed entrance into the 1 Percent: Good college (Georgetown), an investment bank (Morgan Stanley), MBA (Harvard). Then a hedge fund. A decade out of business school, he was heading Standard Pacific Capital, a multibillion-dollar San Francisco firm that traded global stocks. It did well by its clients, making money in 2008 as markets plummeted.

But Dillard’s returns—like most other hedge fund managers’—failed to keep pace in the post-Great Recession bull market. Investors exited. In February, when assets slid below $500 million, Dillard pulled the plug. “It has recently become clear to both of us that sometimes there is a logical conclusion to even a good thing,” he and his partner, Raj Venkatesan, wrote to clients.They aren’t the only ones thinking their good thing might be gone. On April 26, Third Point manager Dan Loeb, one of the hedge fund elite, wrote to investors that the industry is “in the first innings of a washout.” At the annual Berkshire Hathaway shareholder meeting at the end of April, Warren Buffett told investors to keep money away from hedge funds because of their high fees and lousy return  Ful Story

Money managers ( and other financial experts) are no different from the average Joe; they place too much value on useless information.

For the world’s top hedge fund managers, 2015 was a fantastic year, with an astounding amount of money made. Institutional Investor’s Alpha magazine released its annual review of how the top managers fared last year, and the tally for the group of 25 came in at nearly $13 billion, up 10 percent over 2014. In any year, that figure would likely grab headlines, but considering that it was the worst year for funds since 2011—with Atlantic Investment Management founder Alexander Roepers telling the Wall Street Journal “Everything went wrong”—those totals seem particularly enormous. Full Story

If hedge funds fared so poorly in 2015, then 2016 is going to be even worse, and 2017 could be a killer (as in Kaput) for many of the large funds. Most money managers are too brash, know next to nothing and follow each other.  That is why so many funds are bailing out of NFLX and AAPL now when it makes more sense to buy than sell. Thus just like the masses they sell when it is time to buy and buy when its time to sell.

The world’s largest hedge funds cut their holdings in Netflix and Apple more aggressively than any other stocks in the second quarter, according to a new report.

The 50 biggest hedge funds sold $2 billion worth of Netflix shares and $1.8 billion in Apple stock between April and June, per an analysis of regulatory disclosures by FactSet. Full Story

More examples of what we term “Noise Events.”

After the Media made a huge issue of this and said the world was about to end, lo and behold, the markets bottomed instead of crashing.

Mass Media once again, starts beating the drums of fear in Jan and Feb of 2016:

Once again they ended up biting the dust as the markets soared higher instead of crashing. Instead of embracing the pullback as a buying opportunity; they viewed it through the lens of fear.  On both occasions, we openly stated that all sharp corrections had to be visualised through a bullish lens.  Fear sells and that is why the Media loves to make a mountain out of a molehill.

Britain’s vote on Friday to leave the EU has sparked widespread turmoil and uncertainty, forcing Prime Minister David Cameron to resign and wiping more than $2 trillion of value from markets around the world.

Another event, where the press took extreme delight in sowing the seeds of panic and once again they were made to look like fools. If you look back after the initial panic, the world moved on as it always does.

We could list a countless more events and in each case, the outcome will always be the same; those that panic will lose and those that remain calm will reap the rewards.

As long as Fiat money exists, any alarm event should be viewed as an opportunity. There is just too much noise in this world today. In fact, there is so much noise that it is very hard to get a bearing on what is going on if you fixate on this nonsense. You need to look at everything with a disinterested gaze to spot the main pattern. If you are drawn in by an event, you are no longer thinking logically; your emotions are doing the thinking for you.  Focus on the trend and not the noise; the trend is your friend everything else is your foe.

“Each of us makes his own weather, determines the colour of the skies in the emotional universe which he inhabits.” ~ Bishop Fulton J. Sheen